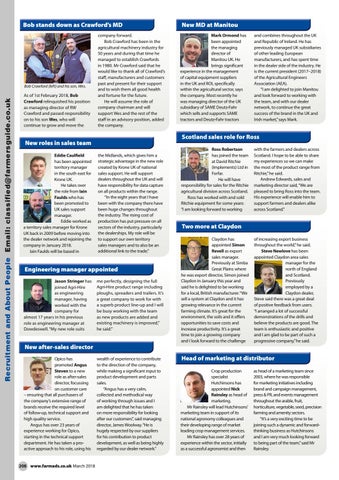 Bob stands down as Crawford’s MD

As of 1st February 2018, Bob Crawford relinquished his position as managing director of RW Crawford and passed responsibility on to his son Wes, who will continue to grow and move the

company forward. Bob Crawford has been in the agricultural machinery industry for 50 years and during that time he managed to establish Crawfords in 1980. Mr Crawford said that he would like to thank all of Crawford’s staff, manufacturers and customers past and present for their support and to wish them all good health and fortune for the future. He will assume the role of company chairman and will support Wes and the rest of the staff in an advisory position, added the company.

the Midlands, which gives him a strategic advantage in the new role created by Krone UK of national sales support. He will support dealers throughout the UK and will have responsibility for data capture on all products within the range. “In the eight years that I have been with the company there have been huge changes throughout the industry. The rising cost of production has put pressure on all sectors of the industry, particularly the dealerships. My role will be to support our own territory sales managers and to also be an additional link to the trade.”

me perfectly, designing the full Agri-Hire product range including ploughs, spreaders and trailers. It’s a great company to work for with a superb product line-up and I will be busy working with the team as new products are added and existing machinery is improved,” he said.”

New after-sales director Opico has promoted Angus Steven to a new role as after-sales director, focussing on customer care – ensuring that all purchasers of the company’s extensive range of brands receive the required level of follow-up, technical support and high quality service. Angus has over 23 years of experience working for Opico, starting in the technical support department. He has taken a proactive approach to his role, using his

Mark Ormond has been appointed the managing director of Manitou UK. He brings significant experience in the management of capital equipment suppliers in the UK and ROI, specifically within the agricultural sector, says the company. Most recently he was managing director of the UK subsidiary of SAME Deutz-Fahr which sells and supports SAME tractors and Deutz-Fahr tractors

and combines throughout the UK and Republic of Ireland. He has previously managed UK subsidiaries of other leading European manufacturers, and has spent time in the dealer side of the industry. He is the current president (2017–2018) of the Agricultural Engineers Association (AEA). “I am delighted to join Manitou and look forward to working with the team, and with our dealer network, to continue the great success of the brand in the UK and Irish market,” says Mark.

New roles in sales team Eddie Caulfield has been appointed territory manager in the south east for Krone UK. He takes over the role from Iain Faulds who has been promoted to UK sales support manager. Eddie worked as a territory sales manager for Krone UK back in 2009 before moving into the dealer network and rejoining the company in January 2018. Iain Faulds will be based in

wealth of experience to contribute to the direction of the company, while making a significant input to product development and parts sales. “Angus has a very calm, collected and methodical way of working through issues and I am delighted that he has taken on more responsibility for looking after our customers”, said managing director, James Woolway. “He is hugely respected by our suppliers for his contribution to product development, as well as being highly regarded by our dealer network.”

Ross Robertson has joined the team at David Ritchie (Implements) Ltd in Forfar. He will have responsibility for sales for the Ritchie agricultural division across Scotland. Ross has worked with and sold Ritchie equipment for some years: “I am looking forward to working

Two more at Claydon Claydon has appointed Simon Revell as export sales manager. Previously at Simba Great Plains where he was export director, Simon joined Claydon in January this year and said he is delighted to be working for a local, British manufacturer. “We sell a system at Claydon and it has growing relevance in the current farming climate. It’s great for the environment, the soils and it offers opportunities to save costs and increase productivity. It’s a great time to join a growing company and I look forward to the challenge

of increasing export business throughout the world,” he said. Steve Newlove has been appointed Claydon area sales manager for the north of England and Scotland. Previously employed by a Claydon dealer, Steve said there was a great deal of positive feedback from users. “I arranged a lot of successful demonstrations of the drills and believe the products are good. The team is enthusiastic and positive and I am glad to be part of such a progressive company,” he said.

Head of marketing at distributor Crop production specialist Hutchinsons has appointed Nick Rainsley as head of marketing. Mr Rainsley will lead Hutchinsons’ marketing team in support of its national agronomy colleagues and their developing range of market leading crop management services. Mr Rainsley has over 28 years of experience within the sector, initially as a successful agronomist and then

as head of a marketing team since 2003, where he was responsible for marketing initiatives including brand and campaign management, press & PR, and events management throughout the arable, fruit, horticulture, vegetable, seed, precision farming and amenity sectors. “It’s a very exciting time to be joining such a dynamic and forwardthinking business as Hutchinsons and I am very much looking forward to being part of the team,” said Mr Rainsley.