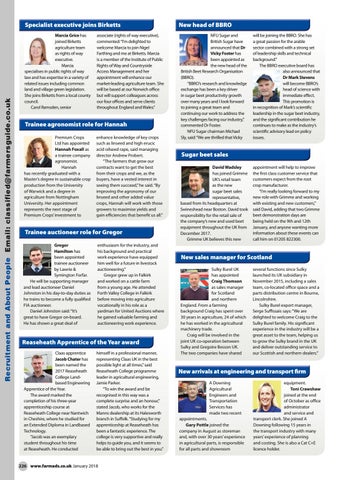 associate (rights of way executive), commented: “I’m delighted to welcome Marcia to join Nigel Farthing and me at Birketts. Marcia is a member of the Institute of Public Rights of Way and Countryside Access Management and her appointment will enhance our market-leading agriculture team. She will be based at our Norwich office but will support colleagues across our four offices and serve clients throughout England and Wales.”

Trainee agronomist role for Hannah Premium Crops Ltd has appointed Hannah Foxall as a trainee company agronomist. Hannah has recently graduated with a Master’s degree in sustainable crop production from the University of Warwick and a degree in agriculture from Nottingham University. Her appointment represents the next stage of Premium Crops’ investment to

enhance knowledge of key crops such as linseed and high erucic acid oilseed rape, said managing director Andrew Probert. “The farmers that grow our contracts want to get the best from their crops and we, as the buyers, have a vested interest in seeing them succeed,” he said. “By improving the agronomy of our linseed and other added value crops, Hannah will work with those growers to maximise yields and gain efficiencies that benefit us all.”

enthusiasm for the industry, and his background and practical work experience have equipped him well for a future in livestock auctioneering.” Gregor grew up in Falkirk and worked on a cattle farm from a young age. He attended Forth Valley College in Falkirk before moving into agriculture vocationally in his role as a yardman for United Auctions where he gained valuable farming and auctioneering work experience.

himself in a professional manner, representing Claas UK in the best possible light at all times,” said Reaseheath College programme leader in agricultural engineering, Jamie Parker. “To win the award and be recognised in this way was a complete surprise and an honour,” stated Jacob, who works for the Manns dealership at its Halesworth branch in Suffolk. “Studying for my apprenticeship at Reaseheath has been a fantastic experience. The college is very supportive and really helps to guide you, and it seems to be able to bring out the best in you.”

New head of BBRO NFU Sugar and British Sugar have announced that Dr Vicky Foster has been appointed as the new head of the British Beet Research Organisation (BBRO). “BBRO’s research and knowledge exchange has been a key driver in sugar beet productivity growth over many years and I look forward to joining a great team and continuing our work to address the key challenges facing our industry,” commented Dr Foster. NFU Sugar chairman Michael Sly, said: “We are thrilled that Vicky

will be joining the BBRO. She has a great passion for the arable sector combined with a strong set of leadership skills and technical background.” The BBRO executive board has also announced that Dr Mark Stevens will become BBRO’s head of science with immediate effect. This promotion is in recognition of Mark’s scientific leadership in the sugar beet industry, and the significant contribution he continues to make as the industry’s scientific advisory lead on policy issues.

Sugar beet sales David Wadsley has joined Grimme UK’s retail team as the new sugar beet sales representative, based from its headquarters at Swineshead near Boston. David took responsibility for the retail sale of the company’s new and used beet equipment throughout the UK from December 2017. Grimme UK believes this new

appointment will help to improve the first class customer service that customers expect from the root crop manufacturer. “I’m really looking forward to my new role with Grimme and working with existing and new customers,” said David, adding that two Grimme beet demonstration days are being held on the 9th and 12th January, and anyone wanting more information about these events can call him on 01205 822300.

New sales manager for Scotland Sulky Burel UK has appointed Craig Thomson as sales manager for Scotland and northern England. From a farming background Craig has spent over 30 years in agriculture, 24 of which he has worked in the agricultural machinery trade. Craig will be involved in the joint UK co-operation between Sulky and Gregoire Besson UK. The two companies have shared

several functions since Sulky launched its UK subsidiary in November 2015, including a sales team, co-located office space and a parts distribution centre in Bourne, Lincolnshire. Sulky Burel export manager, Serge Suffissais says: “We are delighted to welcome Craig to the Sulky Burel family. His significant experience in the industry will be a great asset to the team, helping us to grow the Sulky brand in the UK and deliver outstanding service to our Scottish and northern dealers.”

New arrivals at engineering and transport firm A Downing Agricultural Engineers and Transportation Services has made two recent appointments. Gary Pottle joined the company in August as storeman and, with over 30 years’ experience in agricultural parts, is responsible for all parts and showroom

equipment. Toni Crawshaw joined at the end of October as office administrator and service and transport clerk. She joined A Downing following 15 years in the transport industry with many years’ experience of planning and costing. She is also a Cat C+E licence holder.