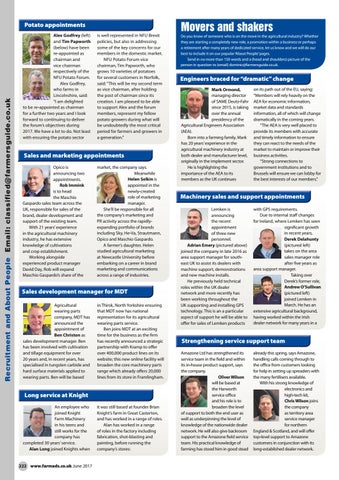 Potato appointments Alex Godfrey (left) and Tim Papworth (below) have been re-appointed as chairman and vice chairman respectively of the NFU Potato Forum. Alex Godfrey, who farms in Lincolnshire, said: “I am delighted to be re-appointed as chairman for a further two years and I look forward to continuing to deliver the forum’s objectives during 2017. We have a lot to do. Not least with ensuring the potato sector

is well represented in NFU Brexit policies, but also in addressing some of the key concerns for our members in the domestic market. NFU Potato Forum vice chairman, Tim Papworth, who grows 10 varieties of potatoes for several customers in Norfolk, said: “This will be my second term as vice chairman, after holding the post of chairman since its creation. I am pleased to be able to support Alex and the forum members, represent my fellow potato growers during what will be undoubtedly the most critical period for farmers and growers in a generation.”

Sales and marketing appointments Opico is announcing two appointments. Rob Immink is to head the Maschio Gaspardo sales team across the UK, responsible for sales of the brand, dealer development and support of the existing team. With 21 years’ experience in the agricultural machinery industry, he has extensive knowledge of cultivations and crop establishment. Working alongside experienced product manager David Day, Rob will expand Maschio Gaspardo’s share of the

market, the company says. Meanwhile Helen Selkin is appointed in the newly-created role of marketing manager. She’ll be responsible for all the company’s marketing and PR activity across the rapidlyexpanding portfolio of brands including Sky, He-Va, Strautmann, Opico and Maschio Gaspardo. A farmer’s daughter, Helen studied agricultural marketing at Newcastle University before embarking on a career in brand marketing and communications across a range of industries.

in Thirsk, North Yorkshire ensuring that MDT now has national representation for its agricultural wearing parts service. Ben joins MDT at an exciting time for the business as the firm has recently announced a strategic partnership with Kramp to offer over 400,000 product lines on its website; this new online facility will broaden the core machinery parts range which already offers 20,000 lines from its store in Framlingham.

Long service at Knight An employee who joined Knight Farm Machinery in his teens and still works for the company has completed 30 years’ service. Alan Long joined Knights when

Movers and shakers Do you know of someone who is on the move in the agricultural industry? Whether they are starting a completely new role, a promotion within a business or perhaps a retirement after many years of dedicated service, let us know and we will do our best to include it on our popular ‘About People’ pages. Send in no more than 150 words and a (head and shoulders) picture of the person in question to (email) dominic@farmersguide.co.uk.

Engineers braced for “dramatic” change Mark Ormond, managing director of SAME Deutz-Fahr since 2015, is taking over the annual presidency of the Agricultural Engineers Association (AEA). Born into a farming family, Mark has 20 years’ experience in the agricultural machinery industry at both dealer and manufacturer level, originally in the implement sector. He is highlighting the importance of the AEA to its members as the UK continues

on its path out of the EU, saying: “Members will rely heavily on the AEA for economic information, market data and standards information, all of which will change dramatically in the coming years. “The AEA is very well placed to provide its members with accurate and timely information to ensure they can react to the needs of the market to maintain or improve their business activities. “Strong connections to government institutions and to Brussels will ensure we can lobby for the best interests of our members.”

Machinery sales and support appointments Lemken is announcing the recent appointment of three new personnel. Adrian Emery (pictured above) joined the company in late 2016 as area support manager for southeast UK to assist its dealers with machine support, demonstrations and new machine installs. He previously held technical roles within the UK dealer network and more recently has been working throughout the UK supporting and installing GPS technology. This is an a particular aspect of support he will be able to offer for sales of Lemken products

with GPS requirements. Due to internal staff changes for Ireland, where Lemken has seen significant growth in recent years, Derek Delahunty (pictured left) takes on the area sales manager role after five years as area support manager. Taking over Derek’s former role, Andrew O’Sullivan (pictured left) joined Lemken in March. He has an extensive agricultural background, having worked within the Irish dealer network for many years in a

Strengthening service support team Amazone Ltd has strengthened its service team in the field and within its in-house product support, says the company. Oliver Wilson will be based at the Harworth service office and his role is to broaden the level of support to both the end user as well as underpinning the level of knowledge of the nationwide dealer network. He will also give backroom support to the Amazone field service team. His practical knowledge of farming has stood him in good stead

already this spring, says Amazone, handling calls coming through to the office from customers looking for help in setting up spreaders with the many fertilisers available. With his strong knowledge of electronics and high-tech kit, Chris Wilson joins the company as territory area service manager for northern England & Scotland, and will offer top-level support to Amazone customers in conjunction with its long-established dealer network.