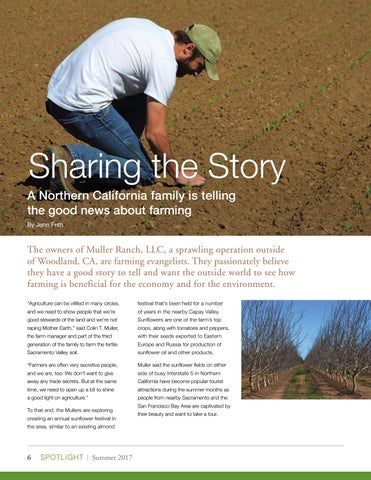 The owners of Muller Ranch, LLC, a sprawling operation outside of Woodland, CA, are farming evangelists. They passionately believe they have a good story to tell and want the outside world to see how farming is beneficial for the economy and for the environment. “Agriculture can be vilified in many circles,

festival that’s been held for a number

and we need to show people that we’re

of years in the nearby Capay Valley.

good stewards of the land and we’re not

Sunflowers are one of the farm’s top

crops, along with tomatoes and peppers,

the farm manager and part of the third

with their seeds exported to Eastern

generation of the family to farm the fertile

Europe and Russia for production of

sunflower oil and other products.

Muller said the sunflower fields on either

and we are, too. We don’t want to give

side of busy Interstate 5 in Northern

away any trade secrets. But at the same

time, we need to open up a bit to shine

attractions during the summer months as

a good light on agriculture.”

people from nearby Sacramento and the

To that end, the Mullers are exploring creating an annual sunflower festival in the area, similar to an existing almond

San Francisco Bay Area are captivated by their beauty and want to take a tour. 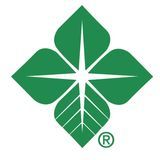