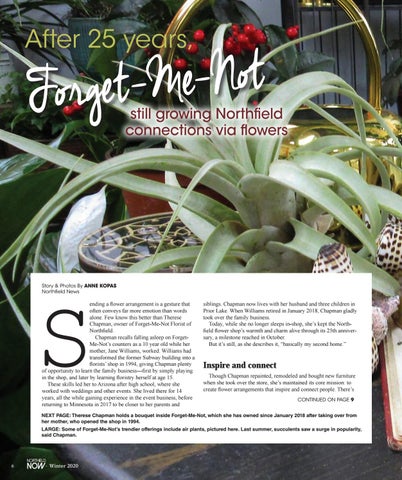 ending a flower arrangement is a gesture that often conveys far more emotion than words alone. Few know this better than Therese Chapman, owner of Forget-Me-Not Florist of Northfield. Chapman recalls falling asleep on ForgetMe-Not’s counters as a 10 year old while her mother, Jane Williams, worked. Williams had transformed the former Subway building into a florists’ shop in 1994, giving Chapman plenty of opportunity to learn the family business—first by simply playing in the shop, and later by learning floristry herself at age 15. These skills led her to Arizona after high school, where she worked with weddings and other events. She lived there for 14 years, all the while gaining experience in the event business, before returning to Minnesota in 2017 to be closer to her parents and

siblings. Chapman now lives with her husband and three children in Prior Lake. When Williams retired in January 2018, Chapman gladly took over the family business. Today, while she no longer sleeps in-shop, she’s kept the Northfield flower shop’s warmth and charm alive through its 25th anniversary, a milestone reached in October. But it’s still, as she describes it, “basically my second home.”

Inspire and connect Though Chapman repainted, remodeled and bought new furniture when she took over the store, she’s maintained its core mission: to create flower arrangements that inspire and connect people. There’s CONTINUED ON PAGE 9

NEXT PAGE: Therese Chapman holds a bouquet inside Forget-Me-Not, which she has owned since January 2018 after taking over from her mother, who opened the shop in 1994. LARGE: Some of Forget-Me-Not’s trendier offerings include air plants, pictured here. Last summer, succulents saw a surge in popularity, said Chapman.