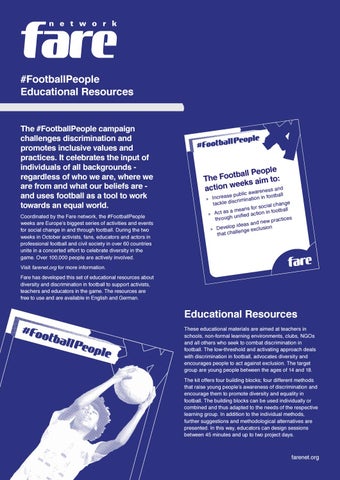 #FootballPeople Educational Resources The #FootballPeople campaign challenges discrimination and promotes inclusive values and practices. It celebrates the input of individuals of all backgrounds regardless of who we are, where we are from and what our beliefs are and uses football as a tool to work towards an equal world. Coordinated by the Fare network, the #FootballPeople weeks are Europe’s biggest series of activities and events for social change in and through football. During the two weeks in October activists, fans, educators and actors in professional football and civil society in over 60 countries unite in a concerted effort to celebrate diversity in the game. Over 100,000 people are actively involved.

Visit farenet.org for more information. Fare has developed this set of educational resources about diversity and discrimination in football to support activists, teachers and educators in the game. The resources are free to use and are available in English and German.

Educational Resources These educational materials are aimed at teachers in schools, non-formal learning environments, clubs, NGOs and all others who seek to combat discrimination in football. The low-threshold and activating approach deals with discrimination in football, advocates diversity and encourages people to act against exclusion. The target group are young people between the ages of 14 and 18. The kit offers four building blocks; four different methods that raise young people’s awareness of discrimination and encourage them to promote diversity and equality in football. The building blocks can be used individually or combined and thus adapted to the needs of the respective learning group. In addition to the individual methods, further suggestions and methodological alternatives are presented. In this way, educators can design sessions between 45 minutes and up to two project days.

Examples of discrimination in the context of football:

The Guardian: Sweden squad rally behind midfielder Jimmy Durmaz after he was racially abused online during the World Cup.

1. During a brainstorming session participants are asked what discrimination in football means to them. Their knowledge is then checked against the UNESCO definition (see below): Which aspects have been mentioned? Which aspects are new to us? It is important to note that people are discriminated against on the basis of certain characteristics or affiliations with a certain group. 2. Which forms of discrimination in football do we know – those that relate to others or from our own experience? The participants are divided into pairs. Together they compile a list of situations in which (a) someone has been subjected to discrimination; or

(b) someone has discriminated against someone else. The situations can come from their personal experiences, from acquaintances or also from public figures such as famous footballers. Nobody is obliged to describe their own experiences, if they don’t want to. The participants write down the situations on cards or sticky notes 3. In the plenum the situations are presented and compared with the definition of discrimination: To what extent are these examples discrimination as per definition? 4. Final discussion: Are there similarities or differences? What surprises us? How are these experiences judged? Why do the reactions to and assessments of the individual situations differ? How can such incidents go hand in hand with the rules of the game and the demand for fair play? Is football particularly susceptible to discrimination?

»» At the beginning, it is important to create an atmosphere of trust. »» It is important that practices of exclusion are not reproduced. No one should be made the speaker for certain experiences of exclusion on the basis of their appearance, origin, etc. and no one is obliged to describe personal experiences of exclusion or discrimination. »» To contribute to the discussion, the participants› examples can be supplemented with real cases (see below for suggestions or use your own). »» Finally, the participants can set up internal rules against exclusion for their learning group.

Discrimination is the selection for unfavourable treatment of an individual or individuals on the basis of: gender, race, colour or ethnic or national origin, religion, disability, sexual orientation, social class, age (subject to the usual conventions on retirement), marital status or family responsibilities, or as a result of any conditions or requirements that do not accord with the principles of fairness and natural justice. It can take a variety of forms and may include the following: 1. direct discrimination, for example: refusing to admit students, employ or promote individuals because they are black, female, disabled or because of their sexual orientation; 2. indirect discrimination, for example: setting age qualifications which discriminate against women who have had periods away from work because of family responsibilities. http://www.unesco.org/new/en/social-and-human-sciences/ themes/international-migration/glossary/discrimination/

Lesson 3: QUIET WRITTEN DISCUSSION: What to do against exclusion in football?

Workflow: 1. Participants choose a player/coach/journalist/manager whom who they wish to portray. They should select the role models for their commitment to combating exclusion in football. They should not just look for famous national players, but also local personalities - contemporary and past icons. Are there inspiring people for example in the home club? Further inspiration can come from the “Pioneers of Football” (see below and attached). 2. The participants research the role models that they have selected and create and design a poster. The key questions are: What are their greatest (sporting) successes? What are the most important stages in their curriculum vitae? What is particularly interesting about the person? Why is s/he a role model for diversity?

3. Display the posters as a “Gallery of Diversity” in the school/learning location or a public space.

»» Work in pairs to design the posters »» Create posters as a homework assignment »» Learners present, comment and revise each other’s text and posters »» Organise and opening ceremony/launch event of the gallery; invite guest to view the gallery

»» The exercise should be done silently with no discussions until the end »» The exercise can also be timed so that participants rotate between the tables every five minutes. »» The suggestions/ideas can be evaluated and rated. The participants receive three adhesive points and stick them to the ideas they like best before the discussion starts.

Lesson 4: FISHBOWL DISCUSSION: Working together for diversity in the stadium

»» A pin wall can be provided during the earlier exercises so that questions can be collected for the guest speakers. »» Good preparation is important so that the participants feel secure in front of the experts and have confidence to debate with them or to ask questions. »» A Fishbowl discussion is also possible without external guests. The participants can either express their own opinions or take set roles. »» The Fishbowl discussion can be combined with a film screening or a introductory presentation.

The ‘Fishbowl’ offers an opportunity to open up the project to the outside world and to invite experts or local stakeholders. Players, coaches, managers, fans, journalists the particular interest of the participants should be the guiding factor. The learning group gets the opportunity to ask questions, gain insight and suggest their ideas.

Fare Network: Pioneers of Football - Gives an insight into the long success story of diversity in professional football. Attached and accessible via http://farenet.org/wp-content/uploads/2018/09/Pioneers of Football educational resource 2018.pdf Jewish Allstars: German sports idols between success and persecution An introduction to the history of Jewish athletes in Germany in a trading card format (German and English). http://www.bpb.de/shop/buecher/ einzelpublikationen/210047/jewish-allstars-deutschesportidole-zwischen-erfolg-und-verfolgung PostPravdaMagazine: They’re Not All Crazy! Five Anti-Fascist Football Clubs in Eastern Europe The article portrays antifascist football clubs in Eastern Europe, which fight against exclusion and prejudices. http://www.postpravdamagazine.com/anti-fascist-footballclubs-eastern-europe/ Together #WePlayStrong

Heroes of Football A European mission to ensure that everyone who loves football or takes part in the game, enjoys it and can be who they are. http://www.heroesoffootball.eu Football v Homophobia Month of Action Every year in February the international initiative Football v Homophobia and Fare organise events and activities against homophobia in football to raise awareness about discrimination and celebrate diversity. http://farenet.org/campaigns/football-v-homophobiamonth-action/

On behalf of and published by:

#footballpeople farenet.org Licence: The texts of this handouts are under the CC BY 4.0 license (https://creativecommons.org/ licenses/by/4.0/deed.de). The name of the author should be mentioned as follows in case of further use: KOOPERATIVE BERLIN: All logos used are not covered by this license. 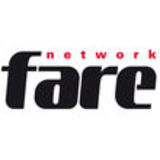