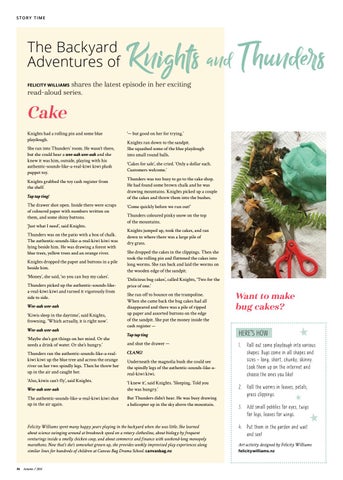 The Backyard Adventures of

shares the latest episode in her exciting read-aloud series.

Cake Knights had a rolling pin and some blue playdough. She ran into Thunders’ room. He wasn’t there, but she could hear a wee-aah wee-aah and she knew it was him, outside, playing with his authentic-sounds-like-a-real-kiwi kiwi plush puppet toy. Knights grabbed the toy cash register from the shelf. Tap tap ting! The drawer shot open. Inside there were scraps of coloured paper with numbers written on them, and some shiny buttons. ‘Just what I need’, said Knights. Thunders was on the patio with a box of chalk. The authentic-sounds-like-a-real-kiwi kiwi was lying beside him. He was drawing a forest with blue trees, yellow trees and an orange river. Knights dropped the paper and buttons in a pile beside him. ‘Money’, she said, ‘so you can buy my cakes’. Thunders picked up the authentic-sounds-likea-real-kiwi kiwi and turned it vigorously from side to side. Wee-aah wee-aah ‘Kiwis sleep in the daytime’, said Knights, frowning. ‘Which actually, it is right now’. Wee-aah wee-aah ‘Maybe she’s got things on her mind. Or she needs a drink of water. Or she’s hungry.’

‘— but good on her for trying.’ Knights ran down to the sandpit. She squashed some of the blue playdough into small round balls. ‘Cakes for sale’, she cried. ‘Only a dollar each. Customers welcome.’ Thunders was too busy to go to the cake shop. He had found some brown chalk and he was drawing mountains. Knights picked up a couple of the cakes and threw them into the bushes. ‘Come quickly before we run out!’ Thunders coloured pinky snow on the top of the mountains. Knights jumped up, took the cakes, and ran down to where there was a large pile of dry grass. She dropped the cakes in the clippings. Then she took the rolling pin and flattened the cakes into long worms. She ran back and laid the worms on the wooden edge of the sandpit. ‘Delicious bug cakes’, called Knights, ‘Two for the price of one.’ She ran off to bounce on the trampoline. When she came back the bug cakes had all disappeared and there was a pile of ripped up paper and assorted buttons on the edge of the sandpit. She put the money inside the cash register — Tap tap ting and shut the drawer —

Thunders ran the authentic-sounds-like-a-realkiwi kiwi up the blue tree and across the orange river on her two spindly legs. Then he threw her up in the air and caught her.

‘I knew it’, said Knights. ‘Sleeping. Told you she was hungry.’

The authentic-sounds-like-a-real-kiwi kiwi shot up in the air again.

But Thunders didn’t hear. He was busy drawing a helicopter up in the sky above the mountain.

Underneath the magnolia bush she could see the spindly legs of the authentic-sounds-like-areal-kiwi kiwi.

Felicity Williams spent many happy years playing in the backyard when she was little. She learned about science swinging around at breakneck speed on a rotary clothesline, about biology by frequent venturings inside a smelly chicken coop, and about commerce and finance with weekend-long monopoly marathons. Now that’s she’s somewhat grown up, she provides weekly improvised play experiences along similar lines for hundreds of children at Canvas Bag Drama School. canvasbag.nz

Want to make bug cakes? HERE’S HOW 1. Roll out some playdough into various shapes. Bugs come in all shapes and sizes – long, short, chunky, skinny. Look them up on the internet and choose the ones you like! 2. Roll the worms in leaves, petals, grass clippings. 3. Add small pebbles for eyes, twigs for legs, leaves for wings. 4. Put them in the garden and wait and see! Art activity designed by Felicity Williams felicitywilliams.nz