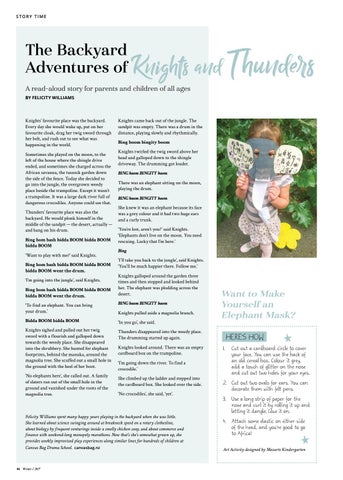 The Backyard Adventures of

Knights came back out of the jungle. The sandpit was empty. There was a drum in the distance, playing slowly and rhythmically. Bing boom bingity boom Knights twirled the twig sword above her head and galloped down to the shingle driveway. The drumming got louder. BING boom BINGITY boom There was an elephant sitting on the moon, playing the drum. BING boom BINGITY boom She knew it was an elephant because its face was a grey colour and it had two huge ears and a curly trunk. ‘You’re lost, aren’t you?’ said Knights. ‘Elephants don’t live on the moon. You need rescuing. Lucky that I’m here.’ Bing ‘I’ll take you back to the jungle’, said Knights. ‘You’ll be much happier there. Follow me.’ Knights galloped around the garden three times and then stopped and looked behind her. The elephant was plodding across the desert.

‘To find an elephant. You can bring your drum.’

Knights sighed and pulled out her twig sword with a flourish and galloped down towards the weedy place. She disappeared into the shrubbery. She hunted for elephant footprints, behind the manuka, around the magnolia tree. She scuffed out a small hole in the ground with the heel of her boot.

Thunders disappeared into the weedy place. The drumming started up again.

‘No elephants here’, she called out. A family of slaters ran out of the small hole in the ground and vanished under the roots of the magnolia tree.

Knights pulled aside a magnolia branch.

Knights looked around. There was an empty cardboard box on the trampoline. ‘I’m going down the river. To find a crocodile.’ She climbed up the ladder and stepped into the cardboard box. She looked over the side. ‘No crocodiles’, she said, ‘yet’.

Felicity Williams spent many happy years playing in the backyard when she was little. She learned about science swinging around at breakneck speed on a rotary clothesline, about biology by frequent venturings inside a smelly chicken coop, and about commerce and finance with weekend-long monopoly marathons. Now that’s she’s somewhat grown up, she provides weekly improvised play experiences along similar lines for hundreds of children at Canvas Bag Drama School. canvasbag.nz

Want to Make Yourself an Elephant Mask? HERE’S HOW 1.

Cut out a cardboard circle to cover your face. You can use the back of an old cereal box. Colour it grey, add a touch of glitter on the nose and cut out two holes for your eyes.

2. Cut out two ovals for ears. You can decorate them with felt pens. 3. Use a long strip of paper for the nose and curl it by rolling it up and letting it dangle. Glue it on. 4. Attach some elastic on either side of the head, and you’re good to go to Africa! Art Activity designed by Mozarts Kindergarten Have a read of our new look issues. All the regular informative parenting advice you love and more. Get in touch and let us know what you th...

Have a read of our new look issues. All the regular informative parenting advice you love and more. Get in touch and let us know what you th...