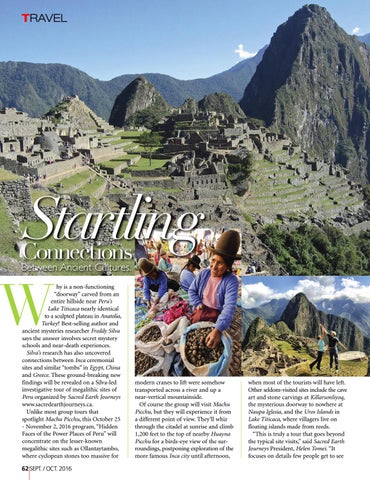 hy is a non-functioning “doorway” carved from an entire hillside near Peru’s Lake Titicaca nearly identical to a sculpted plateau in Anatolia, Turkey? Best-selling author and ancient mysteries researcher Freddy Silva says the answer involves secret mystery schools and near-death experiences. Silva’s research has also uncovered connections between Inca ceremonial sites and similar “tombs” in Egypt, China and Greece. These ground-breaking new findings will be revealed on a Silva-led investigative tour of megalithic sites of Peru organized by Sacred Earth Journeys www.sacredearthjourneys.ca. Unlike most group tours that spotlight Machu Picchu, this October 25 - November 2, 2016 program, “Hidden Faces of the Power Places of Peru” will concentrate on the lesser-known megalithic sites such as Ollantaytambo, where cyclopean stones too massive for

modern cranes to lift were somehow transported across a river and up a near-vertical mountainside. Of course the group will visit Machu Picchu, but they will experience it from a different point of view. They’ll whiz through the citadel at sunrise and climb 1,200 feet to the top of nearby Huayna Picchu for a birds-eye view of the surroundings, postponing exploration of the more famous Inca city until afternoon,

when most of the tourists will have left. Other seldom-visited sites include the cave art and stone carvings at Killarumliyoq, the mysterious doorway to nowhere at Naupa Iglesia, and the Uros Islands in Lake Titicaca, where villagers live on floating islands made from reeds. “This is truly a tour that goes beyond the typical site visits,” said Sacred Earth Journeys President, Helen Tomei. “It focuses on details few people get to see

Desi Fashion is committed to delivering high end editorial and quality content that showcases upcoming Fashion Designers/Boutiques, Beauticians etc. A fashion and lifestyle magazine, published bimonthly Desi Fashion explores the latest in Fashion for Men and Women, Jewelry, Salon and Spa, Health and Beauty and Décor, we also feature the latest in Hot Products, Cars, Travel and Tourism, Entertainment, Music, Food and more. Also showcased are events and festivals happening in and around town. Enjoy your latest issue of 2016 at www.desifashionmag.com 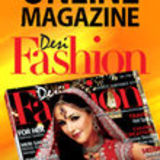