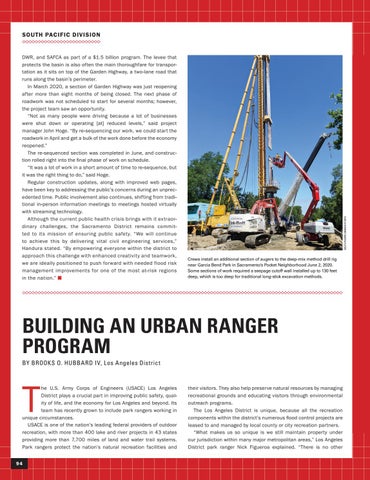 DWR, and SAFCA as part of a $1.5 billion program. The levee that protects the basin is also often the main thoroughfare for transportation as it sits on top of the Garden Highway, a two-lane road that runs along the basin’s perimeter. In March 2020, a section of Garden Highway was just reopening after more than eight months of being closed. The next phase of roadwork was not scheduled to start for several months; however, the project team saw an opportunity. “Not as many people were driving because a lot of businesses were shut down or operating [at] reduced levels,” said project manager John Hoge. “By re-sequencing our work, we could start the roadwork in April and get a bulk of the work done before the economy reopened.” The re-sequenced section was completed in June, and construction rolled right into the final phase of work on schedule. “It was a lot of work in a short amount of time to re-sequence, but it was the right thing to do,” said Hoge. Regular construction updates, along with improved web pages, have been key to addressing the public’s concerns during an unprecedented time. Public involvement also continues, shifting from traditional in-person information meetings to meetings hosted virtually with streaming technology. Although the current public health crisis brings with it extraordinary challenges, the Sacramento District remains committed to its mission of ensuring public safety. “We will continue to achieve this by delivering vital civil engineering services,” Handura stated. “By empowering everyone within the district to approach this challenge with enhanced creativity and teamwork, we are ideally positioned to push forward with needed flood risk management improvements for one of the most at-risk regions in the nation.” n

Crews install an additional section of augers to the deep-mix method drill rig near Garcia Bend Park in Sacramento’s Pocket Neighborhood June 2, 2020. Some sections of work required a seepage cutoff wall installed up to 130 feet deep, which is too deep for traditional long-stick excavation methods.

he U.S. Army Corps of Engineers (USACE) Los Angeles District plays a crucial part in improving public safety, quality of life, and the economy for Los Angeles and beyond. Its team has recently grown to include park rangers working in unique circumstances. USACE is one of the nation’s leading federal providers of outdoor recreation, with more than 400 lake and river projects in 43 states providing more than 7,700 miles of land and water trail systems. Park rangers protect the nation’s natural recreation facilities and

their visitors. They also help preserve natural resources by managing recreational grounds and educating visitors through environmental outreach programs. The Los Angeles District is unique, because all the recreation components within the district’s numerous flood control projects are leased to and managed by local county or city recreation partners. “What makes us so unique is we still maintain property under our jurisdiction within many major metropolitan areas,” Los Angeles District park ranger Nick Figueroa explained. “There is no other