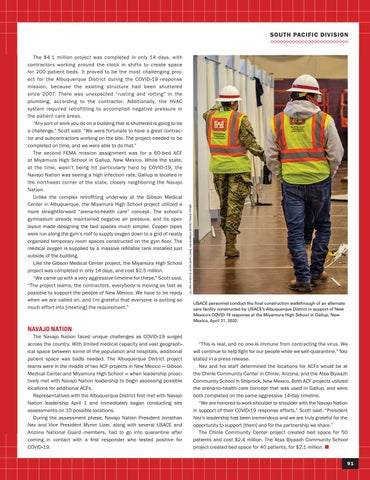 The $4.1 million project was completed in only 14 days, with contractors working around the clock in shifts to create space for 200 patient beds. It proved to be the most challenging project for the Albuquerque District during the COVID-19 response mission, because the existing structure had been shuttered since 2007. There was unexpected “rusting and rotting” in the plumbing, according to the contractor. Additionally, the HVAC system required retrofitting to accomplish negative pressure in the patient care areas. sort GL of work you do on a building that is shuttered is going to be BY“Any MIKE ASCH, Omaha District a challenge,” Scott said. “We were fortunate to have a great contractor and subcontractors working on the site. The project needed to be completed on time, and we were able to do that.” The second FEMA mission assignment was for a 60-bed ACF at Miyamura High School in Gallup, New Mexico. While the state, at the time, wasn’t being hit particularly hard by COVID-19, the Navajo Nation was seeing a high infection rate. Gallup is located in the northwest corner of the state, closely neighboring the Navajo Nation. Unlike the complex retrofitting underway at the Gibson Medical Center in Albuquerque, the Miyamura High School project utilized a more straightforward “arena-to-health care” concept. The school’s gymnasium already maintained negative air pressure, and its open layout made designing the bed spaces much simpler. Copper pipes were run along the gym’s roof to supply oxygen down to a grid of neatly organized temporary room spaces constructed on the gym floor. The medical oxygen is supplied by a massive refillable tank installed just outside of the building. Like the Gibson Medical Center project, the Miyamura High School project was completed in only 14 days, and cost $2.5 million. “We came up with a very aggressive timeline for these,” Scott said. “The project teams, the contractors, everybody is moving as fast as possible to support the people of New Mexico. We have to be ready when we are called on, and I’m grateful that everyone is putting so much effort into [meeting] the requirement.”

NAVAJO NATION The Navajo Nation faced unique challenges as COVID-19 surged across the country. With limited medical capacity and vast geographical space between some of the population and hospitals, additional patient space was badly needed. The Albuquerque District project teams were in the middle of two ACF projects in New Mexico — Gibson Medical Center and Miyamura High School — when leadership proactively met with Navajo Nation leadership to begin assessing possible locations for additional ACFs. Representatives with the Albuquerque District first met with Navajo Nation leadership April 1 and immediately began conducting site assessments on 10 possible locations. During the assessment phase, Navajo Nation President Jonathan Nez and Vice President Myron Lizer, along with several USACE and Arizona National Guard members, had to go into quarantine after coming in contact with a first responder who tested positive for COVID-19.

“This is real, and no one is immune from contracting the virus. We will continue to help fight for our people while we self-quarantine,” Nez stated in a press release. Nez and his staff determined the locations for ACFs would be at the Chinle Community Center in Chinle, Arizona, and the Atsa Biyaazh Community School in Shiprock, New Mexico. Both ACF projects utilized the arena-to-health care concept that was used in Gallup, and were both completed on the same aggressive 14-day timeline. “We are honored to work shoulder to shoulder with the Navajo Nation in support of their COVID-19 response efforts,” Scott said. “President Nez’s leadership has been tremendous and we are truly grateful for the opportunity to support [them] and for the partnership we share.” The Chinle Community Center project created bed space for 50 patients and cost $2.4 million. The Atsa Biyaazh Community School project created bed space for 40 patients, for $2.1 million. n 91