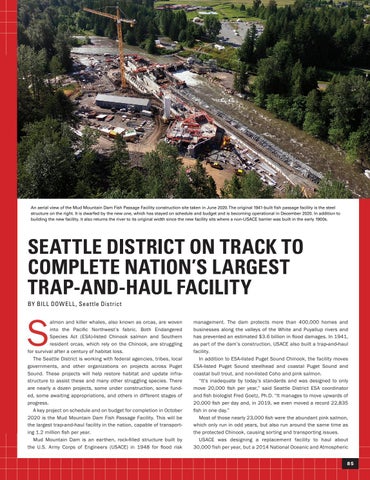 An aerial view of the Mud Mountain Dam Fish Passage Facility construction site taken in June 2020. The original 1941-built fish passage facility is the steel structure on the right. It is dwarfed by the new one, which has stayed on schedule and budget and is becoming operational in December 2020. In addition to building the new facility, it also returns the river to its original width since the new facility sits where a non-USACE barrier was built in the early 1900s.

almon and killer whales, also known as orcas, are woven into the Pacific Northwest’s fabric. Both Endangered Species Act (ESA)-listed Chinook salmon and Southern resident orcas, which rely on the Chinook, are struggling for survival after a century of habitat loss. The Seattle District is working with federal agencies, tribes, local governments, and other organizations on projects across Puget Sound. These projects will help restore habitat and update infrastructure to assist these and many other struggling species. There are nearly a dozen projects, some under construction, some funded, some awaiting appropriations, and others in different stages of progress. A key project on schedule and on budget for completion in October 2020 is the Mud Mountain Dam Fish Passage Facility. This will be the largest trap-and-haul facility in the nation, capable of transporting 1.2 million fish per year. Mud Mountain Dam is an earthen, rock-filled structure built by the U.S. Army Corps of Engineers (USACE) in 1948 for flood risk

management. The dam protects more than 400,000 homes and businesses along the valleys of the White and Puyallup rivers and has prevented an estimated $3.6 billion in flood damages. In 1941, as part of the dam’s construction, USACE also built a trap-and-haul facility. In addition to ESA-listed Puget Sound Chinook, the facility moves ESA-listed Puget Sound steelhead and coastal Puget Sound and coastal bull trout, and non-listed Coho and pink salmon. “It’s inadequate by today’s standards and was designed to only move 20,000 fish per year,” said Seattle District ESA coordinator and fish biologist Fred Goetz, Ph.D. “It manages to move upwards of 20,000 fish per day and, in 2019, we even moved a record 22,835 fish in one day.” Most of those nearly 23,000 fish were the abundant pink salmon, which only run in odd years, but also run around the same time as the protected Chinook, causing sorting and transporting issues. USACE was designing a replacement facility to haul about 30,000 fish per year, but a 2014 National Oceanic and Atmospheric 85