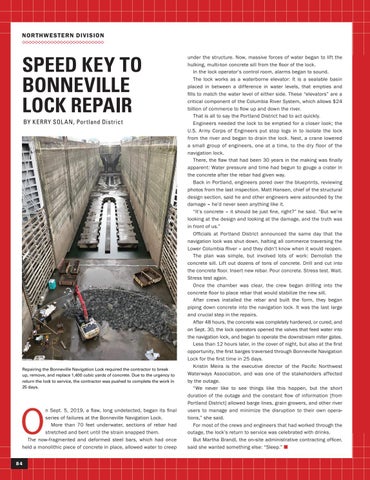 Repairing the Bonneville Navigation Lock required the contractor to break up, remove, and replace 1,400 cubic yards of concrete. Due to the urgency to return the lock to service, the contractor was pushed to complete the work in 25 days.

n Sept. 5, 2019, a flaw, long undetected, began its final series of failures at the Bonneville Navigation Lock. More than 70 feet underwater, sections of rebar had stretched and bent until the strain snapped them. The now-fragmented and deformed steel bars, which had once held a monolithic piece of concrete in place, allowed water to creep

under the structure. Now, massive forces of water began to lift the hulking, multi-ton concrete sill from the floor of the lock. In the lock operator’s control room, alarms began to sound. The lock works as a waterborne elevator: It is a sealable basin placed in between a difference in water levels, that empties and fills to match the water level of either side. These “elevators” are a critical component of the Columbia River System, which allows $24 billion of commerce to flow up and down the river. That is all to say the Portland District had to act quickly. Engineers needed the lock to be emptied for a closer look; the U.S. Army Corps of Engineers put stop logs in to isolate the lock from the river and began to drain the lock. Next, a crane lowered a small group of engineers, one at a time, to the dry floor of the navigation lock. There, the flaw that had been 30 years in the making was finally apparent: Water pressure and time had begun to gouge a crater in the concrete after the rebar had given way. Back in Portland, engineers pored over the blueprints, reviewing photos from the last inspection. Matt Hansen, chief of the structural design section, said he and other engineers were astounded by the damage – he’d never seen anything like it. “It’s concrete – it should be just fine, right?” he said. “But we’re looking at the design and looking at the damage, and the truth was in front of us.” Officials at Portland District announced the same day that the navigation lock was shut down, halting all commerce traversing the Lower Columbia River – and they didn’t know when it would reopen. The plan was simple, but involved lots of work: Demolish the concrete sill. Lift out dozens of tons of concrete. Drill and cut into the concrete floor. Insert new rebar. Pour concrete. Stress test. Wait. Stress test again. Once the chamber was clear, the crew began drilling into the concrete floor to place rebar that would stabilize the new sill. After crews installed the rebar and built the form, they began piping down concrete into the navigation lock. It was the last large and crucial step in the repairs. After 48 hours, the concrete was completely hardened, or cured, and on Sept. 30, the lock operators opened the valves that feed water into the navigation lock, and began to operate the downstream miter gates. Less than 12 hours later, in the cover of night, but also at the first opportunity, the first barges traversed through Bonneville Navigation Lock for the first time in 25 days. Kristin Meira is the executive director of the Pacific Northwest Waterways Association, and was one of the stakeholders affected by the outage. “We never like to see things like this happen, but the short duration of the outage and the constant flow of information [from Portland District] allowed barge lines, grain growers, and other river users to manage and minimize the disruption to their own operations,” she said. For most of the crews and engineers that had worked through the outage, the lock’s return to service was celebrated with drinks. But Martha Brandl, the on-site administrative contracting officer, said she wanted something else: “Sleep.” n