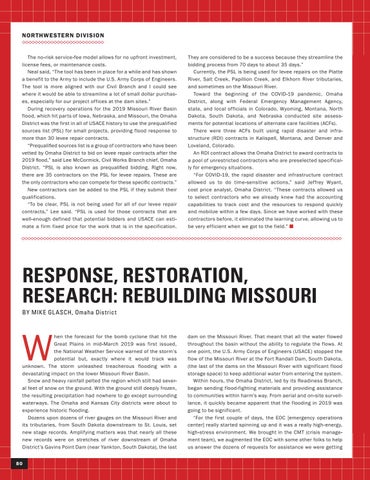 NORTHWESTERN DIVISION The no-risk service-fee model allows for no upfront investment, license fees, or maintenance costs. Neal said, “The tool has been in place for a while and has shown a benefit to the Army to include the U.S. Army Corps of Engineers. The tool is more aligned with our Civil Branch and I could see where it would be able to streamline a lot of small dollar purchases, especially for our project offices at the dam sites.” During recovery operations for the 2019 Missouri River Basin flood, which hit parts of Iowa, Nebraska, and Missouri, the Omaha District was the first in all of USACE history to use the prequalified sources list (PSL) for small projects, providing flood response to more than 30 levee repair contracts. “Prequalified sources list is a group of contractors who have been vetted by Omaha District to bid on levee repair contracts after the 2019 flood,” said Lee McCormick, Civil Works Branch chief, Omaha District. “PSL is also known as prequalified bidding. Right now, there are 35 contractors on the PSL for levee repairs. These are the only contractors who can compete for these specific contracts.” New contractors can be added to the PSL if they submit their qualifications. “To be clear, PSL is not being used for all of our levee repair contracts,” Lee said. “PSL is used for those contracts that are well-enough defined that potential bidders and USACE can estimate a firm fixed price for the work that is in the specification.

They are considered to be a success because they streamline the bidding process from 70 days to about 35 days.” Currently, the PSL is being used for levee repairs on the Platte River, Salt Creek, Papillion Creek, and Elkhorn River tributaries, and sometimes on the Missouri River. Toward the beginning of the COVID-19 pandemic, Omaha District, along with Federal Emergency Management Agency, state, and local officials in Colorado, Wyoming, Montana, North Dakota, South Dakota, and Nebraska conducted site assessments for potential locations of alternate care facilities (ACFs). There were three ACFs built using rapid disaster and infrastructure (RDI) contracts in Kalispell, Montana, and Denver and Loveland, Colorado. An RDI contract allows the Omaha District to award contracts to a pool of unrestricted contractors who are preselected specifically for emergency situations. “For COVID-19, the rapid disaster and infrastructure contract allowed us to do time-sensitive actions,” said Jeffrey Wyant, cost price analyst, Omaha District. “These contracts allowed us to select contractors who we already knew had the accounting capabilities to track cost and the resources to respond quickly and mobilize within a few days. Since we have worked with these contractors before, it eliminated the learning curve, allowing us to be very efficient when we got to the field.” n

hen the forecast for the bomb cyclone that hit the Great Plains in mid-March 2019 was first issued, the National Weather Service warned of the storm’s potential but, exactly where it would track was unknown. The storm unleashed treacherous flooding with a devastating impact on the lower Missouri River Basin. Snow and heavy rainfall pelted the region which still had several feet of snow on the ground. With the ground still deeply frozen, the resulting precipitation had nowhere to go except surrounding waterways. The Omaha and Kansas City districts were about to experience historic flooding. Dozens upon dozens of river gauges on the Missouri River and its tributaries, from South Dakota downstream to St. Louis, set new stage records. Amplifying matters was that nearly all these new records were on stretches of river downstream of Omaha District’s Gavins Point Dam (near Yankton, South Dakota), the last

dam on the Missouri River. That meant that all the water flowed throughout the basin without the ability to regulate the flows. At one point, the U.S. Army Corps of Engineers (USACE) stopped the flow of the Missouri River at the Fort Randall Dam, South Dakota, (the last of the dams on the Missouri River with significant flood storage space) to keep additional water from entering the system. Within hours, the Omaha District, led by its Readiness Branch, began sending flood-fighting materials and providing assistance to communities within harm’s way. From aerial and on-site surveillance, it quickly became apparent that the flooding in 2019 was going to be significant. “For the first couple of days, the EOC [emergency operations center] really started spinning up and it was a really high-energy, high-stress environment. We brought in the CMT (crisis management team), we augmented the EOC with some other folks to help us answer the dozens of requests for assistance we were getting