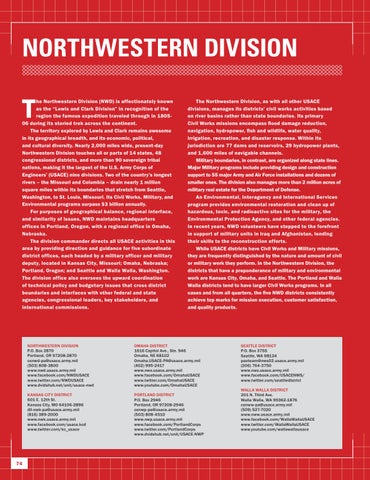 he Northwestern Division (NWD) is affectionately known as the “Lewis and Clark Division” in recognition of the region the famous expedition traveled through in 180506 during its storied trek across the continent. The territory explored by Lewis and Clark remains awesome in its geographical breadth, and its economic, political, and cultural diversity. Nearly 2,000 miles wide, present-day Northwestern Division touches all or parts of 14 states, 48 congressional districts, and more than 90 sovereign tribal nations, making it the largest of the U.S. Army Corps of Engineers’ (USACE) nine divisions. Two of the country’s longest rivers – the Missouri and Columbia – drain nearly 1 million square miles within its boundaries that stretch from Seattle, Washington, to St. Louis, Missouri. Its Civil Works, Military, and Environmental programs surpass $3 billion annually. For purposes of geographical balance, regional interface, and similarity of issues, NWD maintains headquarters offices in Portland, Oregon, with a regional office in Omaha, Nebraska. The division commander directs all USACE activities in this area by providing direction and guidance for five subordinate district offices, each headed by a military officer and military deputy, located in Kansas City, Missouri; Omaha, Nebraska; Portland, Oregon; and Seattle and Walla Walla, Washington. The division office also oversees the upward coordination of technical policy and budgetary issues that cross district boundaries and interfaces with other federal and state agencies, congressional leaders, key stakeholders, and international commissions.

The Northwestern Division, as with all other USACE divisions, manages its districts’ civil works activities based on river basins rather than state boundaries. Its primary Civil Works missions encompass flood damage reduction, navigation, hydropower, fish and wildlife, water quality, irrigation, recreation, and disaster response. Within its jurisdiction are 77 dams and reservoirs, 29 hydropower plants, and 1,600 miles of navigable channels. Military boundaries, in contrast, are organized along state lines. Major Military programs include providing design and construction support to 55 major Army and Air Force installations and dozens of smaller ones. The division also manages more than 2 million acres of military real estate for the Department of Defense. An Environmental, Interagency and International Services program provides environmental restoration and clean up of hazardous, toxic, and radioactive sites for the military, the Environmental Protection Agency, and other federal agencies. In recent years, NWD volunteers have stepped to the forefront in support of military units in Iraq and Afghanistan, lending their skills to the reconstruction efforts. While USACE districts have Civil Works and Military missions, they are frequently distinguished by the nature and amount of civil or military work they perform. In the Northwestern Division, the districts that have a preponderance of military and environmental work are Kansas City, Omaha, and Seattle. The Portland and Walla Walla districts tend to have larger Civil Works programs. In all cases and from all quarters, the five NWD districts consistently achieve top marks for mission execution, customer satisfaction, and quality products.