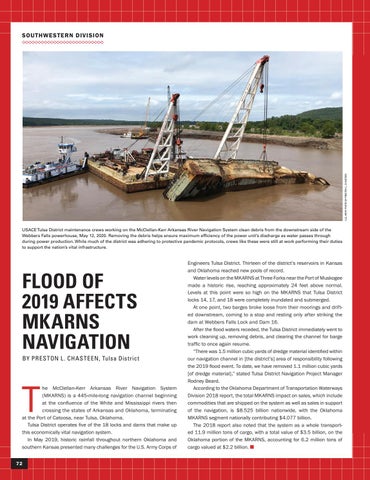 USACE Tulsa District maintenance crews working on the McClellan-Kerr Arkansas River Navigation System clean debris from the downstream side of the Webbers Falls powerhouse, May 12, 2020. Removing the debris helps ensure maximum efficiency of the power unit’s discharge as water passes through during power production. While much of the district was adhering to protective pandemic protocols, crews like these were still at work performing their duties to support the nation’s vital infrastructure.

he McClellan-Kerr Arkansas River Navigation System (MKARNS) is a 445-mile-long navigation channel beginning at the confluence of the White and Mississippi rivers then crossing the states of Arkansas and Oklahoma, terminating at the Port of Catoosa, near Tulsa, Oklahoma. Tulsa District operates five of the 18 locks and dams that make up this economically vital navigation system. In May 2019, historic rainfall throughout northern Oklahoma and southern Kansas presented many challenges for the U.S. Army Corps of

Engineers Tulsa District. Thirteen of the district’s reservoirs in Kansas and Oklahoma reached new pools of record. Water levels on the MKARNS at Three Forks near the Port of Muskogee made a historic rise, reaching approximately 24 feet above normal. Levels at this point were so high on the MKARNS that Tulsa District locks 14, 17, and 18 were completely inundated and submerged. At one point, two barges broke loose from their moorings and drifted downstream, coming to a stop and resting only after striking the dam at Webbers Falls Lock and Dam 16. After the flood waters receded, the Tulsa District immediately went to work cleaning up, removing debris, and clearing the channel for barge traffic to once again resume. “There was 1.5 million cubic yards of dredge material identified within our navigation channel in [the district’s] area of responsibility following the 2019 flood event. To date, we have removed 1.1 million cubic yards [of dredge material],” stated Tulsa District Navigation Project Manager Rodney Beard. According to the Oklahoma Department of Transportation Waterways Division 2018 report, the total MKARNS impact on sales, which include commodities that are shipped on the system as well as sales in support of the navigation, is $8.525 billion nationwide, with the Oklahoma MKARNS segment nationally contributing $4.077 billion. The 2018 report also noted that the system as a whole transported 11.9 million tons of cargo, with a total value of $3.5 billion, on the Oklahoma portion of the MKARNS, accounting for 6.2 million tons of cargo valued at $2.2 billion. n