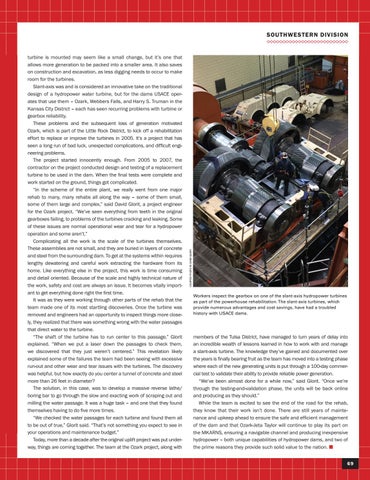 turbine is mounted may seem like a small change, but it’s one that allows more generation to be packed into a smaller area. It also saves on construction and excavation, as less digging needs to occur to make room for the turbines. Slant-axis was and is considered an innovative take on the traditional design of a hydropower water turbine, but for the dams USACE operates that use them – Ozark, Webbers Falls, and Harry S. Truman in the Kansas City District – each has seen recurring problems with turbine or gearbox reliability. These problems and the subsequent loss of generation motivated Ozark, which is part of the Little Rock District, to kick off a rehabilitation effort to replace or improve the turbines in 2005. It’s a project that has seen a long run of bad luck, unexpected complications, and difficult engineering problems. The project started innocently enough. From 2005 to 2007, the contractor on the project conducted design and testing of a replacement turbine to be used in the dam. When the final tests were complete and work started on the ground, things got complicated. “In the scheme of the entire plant, we really went from one major rehab to many, many rehabs all along the way – some of them small, some of them large and complex,” said David Glorit, a project engineer for the Ozark project. “We’ve seen everything from teeth in the original gearboxes failing, to problems of the turbines cracking and leaking. Some of these issues are normal operational wear and tear for a hydropower operation and some aren’t.” Complicating all the work is the scale of the turbines themselves. These assemblies are not small, and they are buried in layers of concrete and steel from the surrounding dam. To get at the systems within requires lengthy dewatering and careful work extracting the hardware from its home. Like everything else in the project, this work is time consuming and detail oriented. Because of the scale and highly technical nature of the work, safety and cost are always an issue. It becomes vitally important to get everything done right the first time. It was as they were working through other parts of the rehab that the team made one of its most startling discoveries. Once the turbine was removed and engineers had an opportunity to inspect things more closely, they realized that there was something wrong with the water passages that direct water to the turbine. “The shaft of the turbine has to run center to this passage,” Glorit explained. “When we put a laser down the passages to check them, we discovered that they just weren’t centered.” This revelation likely explained some of the failures the team had been seeing with excessive run-out and other wear and tear issues with the turbines. The discovery was helpful, but how exactly do you center a tunnel of concrete and steel more than 26 feet in diameter? The solution, in this case, was to develop a massive reverse lathe/ boring bar to go through the slow and exacting work of scraping out and milling the water passage. It was a huge task – and one that they found themselves having to do five more times. “We checked the water passages for each turbine and found them all to be out of true,” Glorit said. “That’s not something you expect to see in your operations and maintenance budget.” Today, more than a decade after the original uplift project was put underway, things are coming together. The team at the Ozark project, along with

Workers inspect the gearbox on one of the slant-axis hydropower turbines as part of the powerhouse rehabilitation. The slant-axis turbines, which provide numerous advantages and cost savings, have had a troubled history with USACE dams.

members of the Tulsa District, have managed to turn years of delay into an incredible wealth of lessons learned in how to work with and manage a slant-axis turbine. The knowledge they’ve gained and documented over the years is finally bearing fruit as the team has moved into a testing phase where each of the new generating units is put through a 100-day commercial test to validate their ability to provide reliable power generation. “We’ve been almost done for a while now,” said Glorit. “Once we’re through the testing-and-validation phase, the units will be back online and producing as they should.” While the team is excited to see the end of the road for the rehab, they know that their work isn’t done. There are still years of maintenance and upkeep ahead to ensure the safe and efficient management of the dam and that Ozark-Jeta Taylor will continue to play its part on the MKARNS, ensuring a navigable channel and producing inexpensive hydropower – both unique capabilities of hydropower dams, and two of the prime reasons they provide such solid value to the nation. n 69