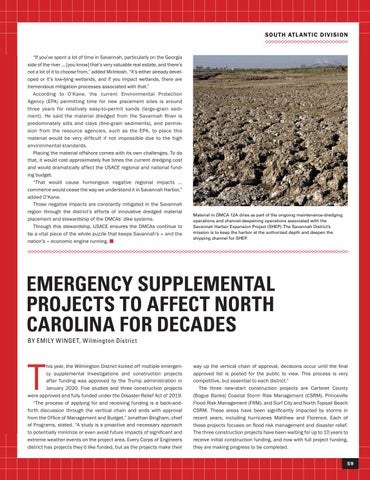 “If you’ve spent a lot of time in Savannah, particularly on the Georgia side of the river … [you know] that’s very valuable real estate, and there’s not a lot of it to choose from,” added McIntosh. “It’s either already developed or it’s low-lying wetlands, and if you impact wetlands, there are tremendous mitigation processes associated with that.” According to O’Kane, the current Environmental Protection Agency (EPA) permitting time for new placement sites is around three years for relatively easy-to-permit sands (large-grain sediment). He said the material dredged from the Savannah River is predominately silts and clays (fine-grain sediments), and permission from the resource agencies, such as the EPA, to place this material would be very difficult if not impossible due to the high environmental standards. Placing the material offshore comes with its own challenges. To do that, it would cost approximately five times the current dredging cost and would dramatically affect the USACE regional and national funding budget. “That would cause humongous negative regional impacts … commerce would cease the way we understand it in Savannah Harbor,” added O’Kane. Those negative impacts are constantly mitigated in the Savannah region through the district’s efforts of innovative dredged material placement and stewardship of the DMCAs’ dike systems. Through this stewardship, USACE ensures the DMCAs continue to be a vital piece of the whole puzzle that keeps Savannah’s – and the nation’s – economic engine running. n

Material in DMCA 12A dries as part of the ongoing maintenance-dredging operations and channel-deepening operations associated with the Savannah Harbor Expansion Project (SHEP). The Savannah District’s mission is to keep the harbor at the authorized depth and deepen the shipping channel for SHEP.

his year, the Wilmington District kicked off multiple emergency supplemental Investigations and construction projects after funding was approved by the Trump administration in January 2020. Five studies and three construction projects were approved and fully funded under the Disaster Relief Act of 2019. “The process of applying for and receiving funding is a back-andforth discussion through the vertical chain and ends with approval from the Office of Management and Budget,” Jonathan Bingham, chief of Programs, stated. “A study is a proactive and necessary approach to potentially minimize or even avoid future impacts of significant and extreme weather events on the project area. Every Corps of Engineers district has projects they’d like funded, but as the projects make their

way up the vertical chain of approval, decisions occur until the final approved list is posted for the public to view. This process is very competitive, but essential to each district.” The three new-start construction projects are Carteret County (Bogue Banks) Coastal Storm Risk Management (CSRM), Princeville Flood Risk Management (FRM), and Surf City and North Topsail Beach CSRM. These areas have been significantly impacted by storms in recent years, including hurricanes Matthew and Florence. Each of these projects focuses on flood risk management and disaster relief. The three construction projects have been waiting for up to 10 years to receive initial construction funding, and now with full project funding, they are making progress to be completed. 59