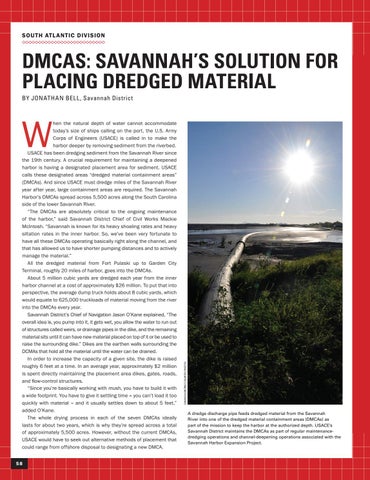 hen the natural depth of water cannot accommodate today’s size of ships calling on the port, the U.S. Army Corps of Engineers (USACE) is called in to make the harbor deeper by removing sediment from the riverbed. USACE has been dredging sediment from the Savannah River since the 19th century. A crucial requirement for maintaining a deepened harbor is having a designated placement area for sediment. USACE calls these designated areas “dredged material containment areas” (DMCAs). And since USACE must dredge miles of the Savannah River year after year, large containment areas are required. The Savannah Harbor’s DMCAs spread across 5,500 acres along the South Carolina side of the lower Savannah River. “The DMCAs are absolutely critical to the ongoing maintenance of the harbor,” said Savannah District Chief of Civil Works Mackie McIntosh. “Savannah is known for its heavy shoaling rates and heavy siltation rates in the inner harbor. So, we’ve been very fortunate to have all these DMCAs operating basically right along the channel, and that has allowed us to have shorter pumping distances and to actively manage the material.” All the dredged material from Fort Pulaski up to Garden City Terminal, roughly 20 miles of harbor, goes into the DMCAs. About 5 million cubic yards are dredged each year from the inner harbor channel at a cost of approximately $26 million. To put that into perspective, the average dump truck holds about 8 cubic yards, which would equate to 625,000 truckloads of material moving from the river into the DMCAs every year. Savannah District’s Chief of Navigation Jason O’Kane explained, “The overall idea is, you pump into it, it gets wet, you allow the water to run out of structures called weirs, or drainage pipes in the dike, and the remaining material sits until it can have new material placed on top of it or be used to raise the surrounding dike.” Dikes are the earthen walls surrounding the DCMAs that hold all the material until the water can be drained. In order to increase the capacity of a given site, the dike is raised roughly 6 feet at a time. In an average year, approximately $2 million is spent directly maintaining the placement area dikes, gates, roads, and flow-control structures. “Since you’re basically working with mush, you have to build it with a wide footprint. You have to give it settling time – you can’t load it too quickly with material – and it usually settles down to about 5 feet,” added O’Kane. The whole drying process in each of the seven DMCAs ideally lasts for about two years, which is why they’re spread across a total of approximately 5,500 acres. However, without the current DMCAs, USACE would have to seek out alternative methods of placement that could range from offshore disposal to designating a new DMCA.

A dredge discharge pipe feeds dredged material from the Savannah River into one of the dredged material containment areas (DMCAs) as part of the mission to keep the harbor at the authorized depth. USACE’s Savannah District maintains the DMCAs as part of regular maintenancedredging operations and channel-deepening operations associated with the Savannah Harbor Expansion Project.