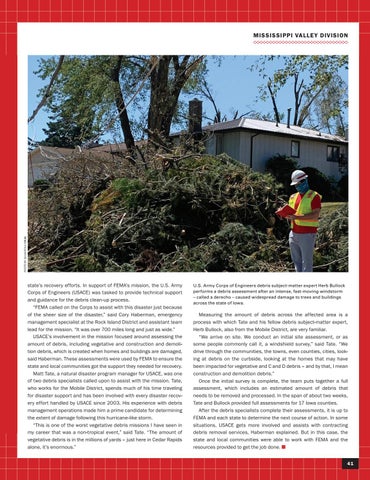 state’s recovery efforts. In support of FEMA’s mission, the U.S. Army Corps of Engineers (USACE) was tasked to provide technical support and guidance for the debris clean-up process. “FEMA called on the Corps to assist with this disaster just because of the sheer size of the disaster,” said Cory Haberman, emergency management specialist at the Rock Island District and assistant team lead for the mission. “It was over 700 miles long and just as wide.” USACE’s involvement in the mission focused around assessing the amount of debris, including vegetative and construction and demolition debris, which is created when homes and buildings are damaged, said Haberman. These assessments were used by FEMA to ensure the state and local communities got the support they needed for recovery. Matt Tate, a natural disaster program manager for USACE, was one of two debris specialists called upon to assist with the mission. Tate, who works for the Mobile District, spends much of his time traveling for disaster support and has been involved with every disaster recovery effort handled by USACE since 2003. His experience with debris management operations made him a prime candidate for determining the extent of damage following this hurricane-like storm. “This is one of the worst vegetative debris missions I have seen in my career that was a non-tropical event,” said Tate. “The amount of vegetative debris is in the millions of yards – just here in Cedar Rapids alone, it’s enormous.”

Measuring the amount of debris across the affected area is a process with which Tate and his fellow debris subject-matter expert, Herb Bullock, also from the Mobile District, are very familiar. “We arrive on site. We conduct an initial site assessment, or as some people commonly call it, a windshield survey,” said Tate. “We drive through the communities, the towns, even counties, cities, looking at debris on the curbside, looking at the homes that may have been impacted for vegetative and C and D debris – and by that, I mean construction and demolition debris.” Once the initial survey is complete, the team puts together a full assessment, which includes an estimated amount of debris that needs to be removed and processed. In the span of about two weeks, Tate and Bullock provided full assessments for 17 Iowa counties. After the debris specialists complete their assessments, it is up to FEMA and each state to determine the next course of action. In some situations, USACE gets more involved and assists with contracting debris removal services, Haberman explained. But in this case, the state and local communities were able to work with FEMA and the resources provided to get the job done. n 41