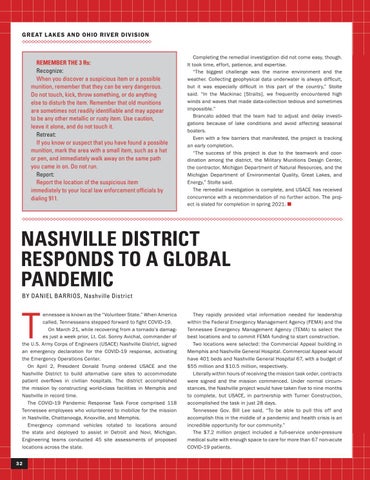 REMEMBER THE 3 Rs: Recognize: When you discover a suspicious item or a possible munition, remember that they can be very dangerous. Do not touch, kick, throw something, or do anything else to disturb the item. Remember that old munitions are sometimes not readily identifiable and may appear to be any other metallic or rusty item. Use caution, leave it alone, and do not touch it. Retreat: If you know or suspect that you have found a possible munition, mark the area with a small item, such as a hat or pen, and immediately walk away on the same path you came in on. Do not run. Report: Report the location of the suspicious item immediately to your local law enforcement officials by dialing 911.

Completing the remedial investigation did not come easy, though. It took time, effort, patience, and expertise. “The biggest challenge was the marine environment and the weather. Collecting geophysical data underwater is always difficult, but it was especially difficult in this part of the country,” Stolte said. “In the Mackinac [Straits], we frequently encountered high winds and waves that made data-collection tedious and sometimes impossible.” Brancato added that the team had to adjust and delay investigations because of lake conditions and avoid affecting seasonal boaters. Even with a few barriers that manifested, the project is tracking an early completion. “The success of this project is due to the teamwork and coordination among the district, the Military Munitions Design Center, the contractor, Michigan Department of Natural Resources, and the Michigan Department of Environmental Quality, Great Lakes, and Energy,” Stolte said. The remedial investigation is complete, and USACE has received concurrence with a recommendation of no further action. The project is slated for completion in spring 2021. n

ennessee is known as the “Volunteer State.” When America called, Tennesseans stepped forward to fight COVID-19. On March 21, while recovering from a tornado’s damages just a week prior, Lt. Col. Sonny Avichal, commander of the U.S. Army Corps of Engineers (USACE) Nashville District, signed an emergency declaration for the COVID-19 response, activating the Emergency Operations Center. On April 2, President Donald Trump ordered USACE and the Nashville District to build alternative care sites to accommodate patient overflows in civilian hospitals. The district accomplished the mission by constructing world-class facilities in Memphis and Nashville in record time. The COVID-19 Pandemic Response Task Force comprised 118 Tennessee employees who volunteered to mobilize for the mission in Nashville, Chattanooga, Knoxville, and Memphis. Emergency command vehicles rotated to locations around the state and deployed to assist in Detroit and Novi, Michigan. Engineering teams conducted 45 site assessments of proposed locations across the state.

They rapidly provided vital information needed for leadership within the Federal Emergency Management Agency (FEMA) and the Tennessee Emergency Management Agency (TEMA) to select the best locations and to commit FEMA funding to start construction. Two locations were selected: the Commercial Appeal building in Memphis and Nashville General Hospital. Commercial Appeal would have 401 beds and Nashville General Hospital 67, with a budget of $55 million and $10.5 million, respectively. Literally within hours of receiving the mission task order, contracts were signed and the mission commenced. Under normal circumstances, the Nashville project would have taken five to nine months to complete, but USACE, in partnership with Turner Construction, accomplished the task in just 28 days. Tennessee Gov. Bill Lee said, “To be able to pull this off and accomplish this in the middle of a pandemic and health crisis is an incredible opportunity for our community.” The $7.2 million project included a full-service under-pressure medical suite with enough space to care for more than 67 non-acute COVID-19 patients.