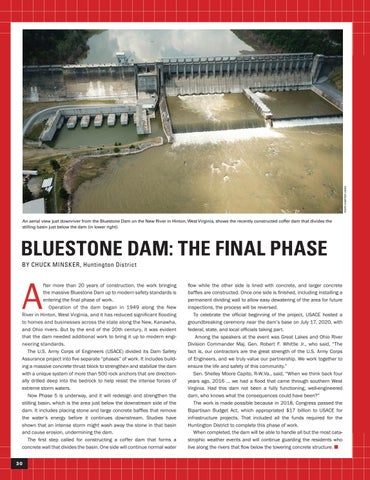 An aerial view just downriver from the Bluestone Dam on the New River in Hinton, West Virginia, shows the recently constructed coffer dam that divides the stilling basin just below the dam (in lower right).

fter more than 20 years of construction, the work bringing the massive Bluestone Dam up to modern safety standards is entering the final phase of work. Operation of the dam began in 1949 along the New River in Hinton, West Virginia, and it has reduced significant flooding to homes and businesses across the state along the New, Kanawha, and Ohio rivers. But by the end of the 20th century, it was evident that the dam needed additional work to bring it up to modern engineering standards. The U.S. Army Corps of Engineers (USACE) divided its Dam Safety Assurance project into five separate “phases” of work. It includes building a massive concrete thrust block to strengthen and stabilize the dam with a unique system of more than 500 rock anchors that are directionally drilled deep into the bedrock to help resist the intense forces of extreme storm waters. Now Phase 5 is underway, and it will redesign and strengthen the stilling basin, which is the area just below the downstream side of the dam. It includes placing stone and large concrete baffles that remove the water’s energy before it continues downstream. Studies have shown that an intense storm might wash away the stone in that basin and cause erosion, undermining the dam. The first step called for constructing a coffer dam that forms a concrete wall that divides the basin. One side will continue normal water

flow while the other side is lined with concrete, and larger concrete baffles are constructed. Once one side is finished, including installing a permanent dividing wall to allow easy dewatering of the area for future inspections, the process will be reversed. To celebrate the official beginning of the project, USACE hosted a groundbreaking ceremony near the dam’s base on July 17, 2020, with federal, state, and local officials taking part. Among the speakers at the event was Great Lakes and Ohio River Division Commander Maj. Gen. Robert F. Whittle Jr., who said, “The fact is, our contractors are the great strength of the U.S. Army Corps of Engineers, and we truly value our partnership. We work together to ensure the life and safety of this community.” Sen. Shelley Moore Capito, R-W.Va., said, “When we think back four years ago, 2016 … we had a flood that came through southern West Virginia. Had this dam not been a fully functioning, well-engineered dam, who knows what the consequences could have been?” The work is made possible because in 2018, Congress passed the Bipartisan Budget Act, which appropriated $17 billion to USACE for infrastructure projects. That included all the funds required for the Huntington District to complete this phase of work. When completed, the dam will be able to handle all but the most catastrophic weather events and will continue guarding the residents who live along the rivers that flow below the towering concrete structure. n