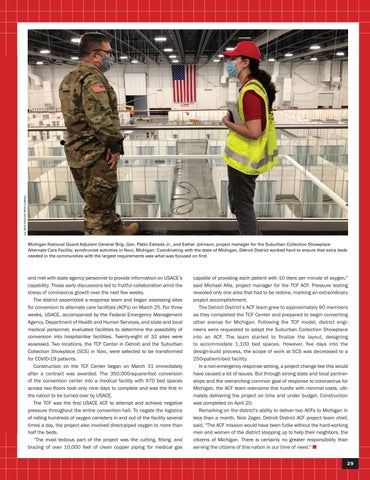 and met with state agency personnel to provide information on USACE’s capability. Those early discussions led to fruitful collaboration amid the stress of coronavirus growth over the next few weeks. The district assembled a response team and began assessing sites for conversion to alternate care facilities (ACFs) on March 25. For three weeks, USACE, accompanied by the Federal Emergency Management Agency, Department of Health and Human Services, and state and local medical personnel, evaluated facilities to determine the possibility of conversion into hospital-like facilities. Twenty-eight of 32 sites were assessed. Two locations, the TCF Center in Detroit and the Suburban Collection Showplace (SCS) in Novi, were selected to be transformed for COVID-19 patients. Construction on the TCF Center began on March 31 immediately after a contract was awarded. The 350,000-square-foot conversion of the convention center into a medical facility with 970 bed spaces across two floors took only nine days to complete and was the first in the nation to be turned over by USACE. The TCF was the first USACE ACF to attempt and achieve negative pressure throughout the entire convention hall. To negate the logistics of rolling hundreds of oxygen canisters in and out of the facility several times a day, the project also involved direct-piped oxygen to more than half the beds. “The most tedious part of the project was the cutting, fitting, and brazing of over 10,000 feet of clean copper piping for medical gas

capable of providing each patient with 10 liters per minute of oxygen,” said Michael Allis, project manager for the TCF ACF. Pressure testing revealed only one area that had to be redone, marking an extraordinary project accomplishment. The Detroit District’s ACF team grew to approximately 90 members as they completed the TCF Center and prepared to begin converting other arenas for Michigan. Following the TCF model, district engineers were requested to adapt the Suburban Collection Showplace into an ACF. The team started to finalize the layout, designing to accommodate 1,100 bed spaces. However, five days into the design-build process, the scope of work at SCS was decreased to a 250-patient-bed facility. In a non-emergency response setting, a project change like this would have caused a lot of issues. But through strong state and local partnerships and the overarching common goal of response to coronavirus for Michigan, the ACF team overcame this hurdle with minimal costs, ultimately delivering the project on time and under budget. Construction was completed on April 20. Remarking on the district’s ability to deliver two ACFs to Michigan in less than a month, Nick Zager, Detroit District ACF project team chief, said, “The ACF mission would have been futile without the hard-working men and women of the district stepping up to help their neighbors, the citizens of Michigan. There is certainly no greater responsibility than serving the citizens of this nation in our time of need.” n 29