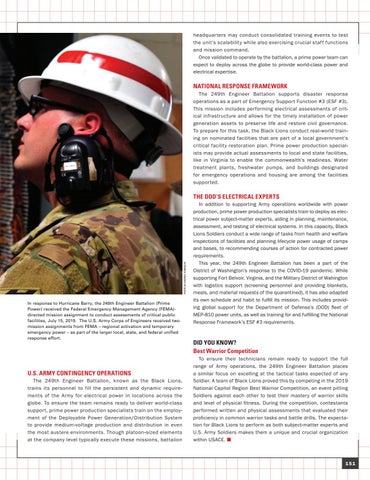 headquarters may conduct consolidated training events to test the unit’s scalability while also exercising crucial staff functions and mission command. Once validated to operate by the battalion, a prime power team can expect to deploy across the globe to provide world-class power and electrical expertise.

NATIONAL RESPONSE FRAMEWORK The 249th Engineer Battalion supports disaster response operations as a part of Emergency Support Function #3 (ESF #3). This mission includes performing electrical assessments of critical infrastructure and allows for the timely installation of power generation assets to preserve life and restore civil governance. To prepare for this task, the Black Lions conduct real-world training on nominated facilities that are part of a local government’s critical facility restoration plan. Prime power production specialists may provide actual assessments to local and state facilities, like in Virginia to enable the commonwealth’s readiness. Water treatment plants, freshwater pumps, and buildings designated for emergency operations and housing are among the facilities supported.

U.S. ARMY CONTINGENCY OPERATIONS The 249th Engineer Battalion, known as the Black Lions, trains its personnel to fill the persistent and dynamic requirements of the Army for electrical power in locations across the globe. To ensure the team remains ready to deliver world-class support, prime power production specialists train on the employment of the Deployable Power Generation/Distribution System to provide medium-voltage production and distribution in even the most austere environments. Though platoon-sized elements at the company level typically execute these missions, battalion

In addition to supporting Army operations worldwide with power production, prime power production specialists train to deploy as electrical power subject-matter experts, aiding in planning, maintenance, assessment, and testing of electrical systems. In this capacity, Black Lions Soldiers conduct a wide range of tasks from health and welfare inspections of facilities and planning lifecycle power usage of camps and bases, to recommending courses of action for contracted power requirements. This year, the 249th Engineer Battalion has been a part of the District of Washington’s response to the COVID-19 pandemic. While supporting Fort Belvoir, Virginia, and the Military District of Wahington with logistics support (screening personnel and providing blankets, meals, and material requests of the quarantined), it has also adapted its own schedule and habit to fulfill its mission. This includes providing global support for the Department of Defense’s (DOD) fleet of MEP-810 power units, as well as training for and fulfilling the National Response Framework’s ESF #3 requirements.

DID YOU KNOW? Best Warrior Competition To ensure their technicians remain ready to support the full range of Army operations, the 249th Engineer Battalion places a similar focus on excelling at the tactical tasks expected of any Soldier. A team of Black Lions proved this by competing in the 2019 National Capitol Region Best Warrior Competition, an event pitting Soldiers against each other to test their mastery of warrior skills and level of physical fitness. During the competition, contestants performed written and physical assessments that evaluated their proficiency in common warrior tasks and battle drills. The expectation for Black Lions to perform as both subject-matter experts and U.S. Army Soldiers makes them a unique and crucial organization within USACE. n