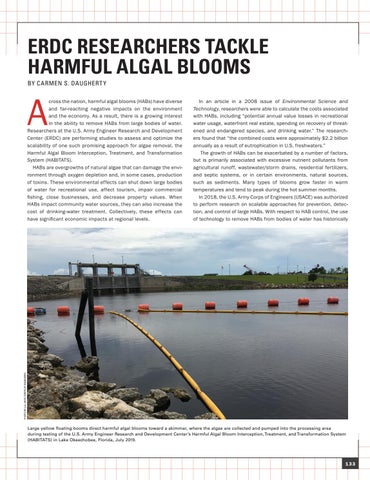 In an article in a 2008 issue of Environmental Science and Technology, researchers were able to calculate the costs associated with HABs, including “potential annual value losses in recreational water usage, waterfront real estate, spending on recovery of threatened and endangered species, and drinking water.” The researchers found that “the combined costs were approximately $2.2 billion annually as a result of eutrophication in U.S. freshwaters.” The growth of HABs can be exacerbated by a number of factors, but is primarily associated with excessive nutrient pollutants from agricultural runoff, wastewater/storm drains, residential fertilizers, and septic systems, or in certain environments, natural sources, such as sediments. Many types of blooms grow faster in warm temperatures and tend to peak during the hot summer months. In 2018, the U.S. Army Corps of Engineers (USACE) was authorized to perform research on scalable approaches for prevention, detection, and control of large HABs. With respect to HAB control, the use of technology to remove HABs from bodies of water has historically

cross the nation, harmful algal blooms (HABs) have diverse and far-reaching negative impacts on the environment and the economy. As a result, there is a growing interest in the ability to remove HABs from large bodies of water. Researchers at the U.S. Army Engineer Research and Development Center (ERDC) are performing studies to assess and optimize the scalability of one such promising approach for algae removal, the Harmful Algal Bloom Interception, Treatment, and Transformation System (HABITATS). HABs are overgrowths of natural algae that can damage the environment through oxygen depletion and, in some cases, production of toxins. These environmental effects can shut down large bodies of water for recreational use, affect tourism, impair commercial fishing, close businesses, and decrease property values. When HABs impact community water sources, they can also increase the cost of drinking-water treatment. Collectively, these effects can have significant economic impacts at regional levels.