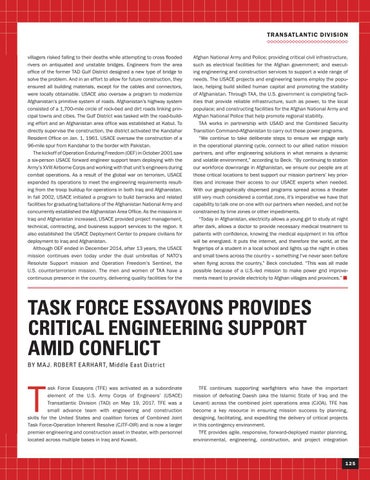 villagers risked falling to their deaths while attempting to cross flooded rivers on antiquated and unstable bridges. Engineers from the area office of the former TAD Gulf District designed a new type of bridge to solve the problem. And in an effort to allow for future construction, they ensured all building materials, except for the cables and connectors, were locally obtainable. USACE also oversaw a program to modernize Afghanistan’s primitive system of roads. Afghanistan’s highway system consisted of a 1,700-mile circle of rock-bed and dirt roads linking principal towns and cities. The Gulf District was tasked with the road-building effort and an Afghanistan area office was established at Kabul. To directly supervise the construction, the district activated the Kandahar Resident Office on Jan. 1, 1961. USACE oversaw the construction of a 96-mile spur from Kandahar to the border with Pakistan. The kickoff of Operation Enduring Freedom (OEF) in October 2001 saw a six-person USACE forward engineer support team deploying with the Army’s XVIII Airborne Corps and working with that unit’s engineers during combat operations. As a result of the global war on terrorism, USACE expanded its operations to meet the engineering requirements resulting from the troop buildup for operations in both Iraq and Afghanistan. In fall 2002, USACE initiated a program to build barracks and related facilities for graduating battalions of the Afghanistan National Army and concurrently established the Afghanistan Area Office. As the missions in Iraq and Afghanistan increased, USACE provided project management, technical, contracting, and business support services to the region. It also established the USACE Deployment Center to prepare civilians for deployment to Iraq and Afghanistan. Although OEF ended in December 2014, after 13 years, the USACE mission continues even today under the dual umbrellas of NATO’s Resolute Support mission and Operation Freedom’s Sentinel, the U.S. counterterrorism mission. The men and women of TAA have a continuous presence in the country, delivering quality facilities for the

Afghan National Army and Police; providing critical civil infrastructure, such as electrical facilities for the Afghan government; and executing engineering and construction services to support a wide range of needs. The USACE projects and engineering teams employ the populace, helping build skilled human capital and promoting the stability of Afghanistan. Through TAA, the U.S. government is completing facilities that provide reliable infrastructure, such as power, to the local populace; and constructing facilities for the Afghan National Army and Afghan National Police that help promote regional stability. TAA works in partnership with USAID and the Combined Security Transition Command-Afghanistan to carry out these power programs. “We continue to take deliberate steps to ensure we engage early in the operational planning cycle, connect to our allied nation mission partners, and offer engineering solutions in what remains a dynamic and volatile environment,” according to Beck. “By continuing to station our workforce downrange in Afghanistan, we ensure our people are at those critical locations to best support our mission partners’ key priorities and increase their access to our USACE experts when needed. With our geographically dispersed programs spread across a theater still very much considered a combat zone, it’s imperative we have that capability to talk one on one with our partners when needed, and not be constrained by time zones or other impediments. “Today in Afghanistan, electricity allows a young girl to study at night after dark, allows a doctor to provide necessary medical treatment to patients with confidence, knowing the medical equipment in his office will be energized. It puts the internet, and therefore the world, at the fingertips of a student in a local school and lights up the night in cities and small towns across the country – something I’ve never seen before when flying across the country,” Beck concluded. “This was all made possible because of a U.S.-led mission to make power grid improvements meant to provide electricity to Afghan villages and provinces.” n

ask Force Essayons (TFE) was activated as a subordinate element of the U.S. Army Corps of Engineers’ (USACE) Transatlantic Division (TAD) on May 19, 2017. TFE was a small advance team with engineering and construction skills for the United States and coalition forces of Combined Joint Task Force-Operation Inherent Resolve (CJTF-OIR) and is now a larger premier engineering and construction asset in theater, with personnel located across multiple bases in Iraq and Kuwait.

TFE continues supporting warfighters who have the important mission of defeating Daesh (aka the Islamic State of Iraq and the Levant) across the combined joint operations area (CJOA). TFE has become a key resource in ensuring mission success by planning, designing, facilitating, and expediting the delivery of critical projects in this contingency environment. TFE provides agile, responsive, forward-deployed master planning, environmental, engineering, construction, and project integration