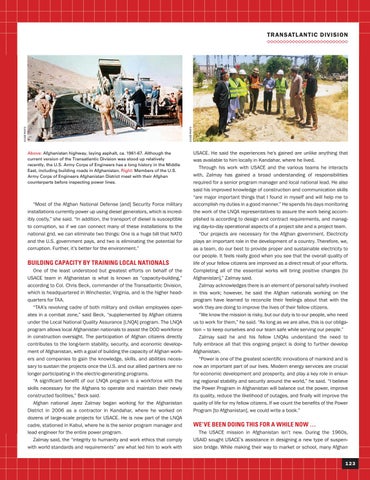 Above: Afghanistan highway, laying asphalt, ca. 1961-67. Although the current version of the Transatlantic Division was stood up relatively recently, the U.S. Army Corps of Engineers has a long history in the Middle East, including building roads in Afghanistan. Right: Members of the U.S. Army Corps of Engineers Afghanistan District meet with their Afghan counterparts before inspecting power lines.

“Most of the Afghan National Defense [and] Security Force military installations currently power up using diesel generators, which is incredibly costly,” she said. “In addition, the transport of diesel is susceptible to corruption, so if we can connect many of these installations to the national grid, we can eliminate two things: One is a huge bill that NATO and the U.S. government pays, and two is eliminating the potential for corruption. Further, it’s better for the environment.”

BUILDING CAPACITY BY TRAINING LOCAL NATIONALS One of the least understood but greatest efforts on behalf of the USACE team in Afghanistan is what is known as “capacity-building,” according to Col. Chris Beck, commander of the Transatlantic Division, which is headquartered in Winchester, Virginia, and is the higher headquarters for TAA. “TAA’s revolving cadre of both military and civilian employees operates in a combat zone,” said Beck, “supplemented by Afghan citizens under the Local National Quality Assurance [LNQA] program. The LNQA program allows local Afghanistan nationals to assist the DOD workforce in construction oversight. The participation of Afghan citizens directly contributes to the long-term stability, security, and economic development of Afghanistan, with a goal of building the capacity of Afghan workers and companies to gain the knowledge, skills, and abilities necessary to sustain the projects once the U.S. and our allied partners are no longer participating in the electric-generating programs. “A significant benefit of our LNQA program is a workforce with the skills necessary for the Afghans to operate and maintain their newly constructed facilities,” Beck said. Afghan national Jayez Zalmay began working for the Afghanistan District in 2006 as a contractor in Kandahar, where he worked on dozens of large-scale projects for USACE. He is now part of the LNQA cadre, stationed in Kabul, where he is the senior program manager and lead engineer for the entire power program. Zalmay said, the “integrity to humanity and work ethics that comply with world standards and requirements” are what led him to work with

USACE. He said the experiences he’s gained are unlike anything that was available to him locally in Kandahar, where he lived. Through his work with USACE and the various teams he interacts with, Zalmay has gained a broad understanding of responsibilities required for a senior program manager and local national lead. He also said his improved knowledge of construction and communication skills “are major important things that I found in myself and will help me to accomplish my duties in a good manner.” He spends his days monitoring the work of the LNQA representatives to assure the work being accomplished is according to design and contract requirements, and managing day-to-day operational aspects of a project site and a project team. “Our projects are necessary for the Afghan government. Electricity plays an important role in the development of a country. Therefore, we, as a team, do our best to provide proper and sustainable electricity to our people. It feels really good when you see that the overall quality of life of your fellow citizens are improved as a direct result of your efforts. Completing all of the essential works will bring positive changes [to Afghanistan],” Zalmay said. Zalmay acknowledges there is an element of personal safety involved in this work; however, he said the Afghan nationals working on the program have learned to reconcile their feelings about that with the work they are doing to improve the lives of their fellow citizens. “We know the mission is risky, but our duty is to our people, who need us to work for them,” he said. “As long as we are alive, this is our obligation – to keep ourselves and our team safe while serving our people.” Zalmay said he and his fellow LNQAs understand the need to fully embrace all that this ongoing project is doing to further develop Afghanistan. “Power is one of the greatest scientific innovations of mankind and is now an important part of our lives. Modern energy services are crucial for economic development and prosperity, and play a key role in ensuring regional stability and security around the world,” he said. “I believe the Power Program in Afghanistan will balance out the power, improve its quality, reduce the likelihood of outages, and finally will improve the quality of life for my fellow citizens. If we count the benefits of the Power Program [to Afghanistan], we could write a book.”

WE’VE BEEN DOING THIS FOR A WHILE NOW … The USACE mission in Afghanistan isn’t new. During the 1960s, USAID sought USACE’s assistance in designing a new type of suspension bridge. While making their way to market or school, many Afghan 123