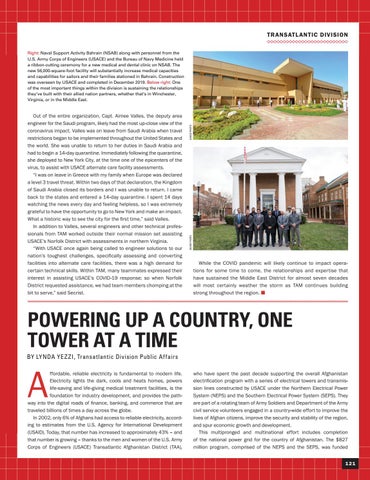 Out of the entire organization, Capt. Aimee Valles, the deputy area engineer for the Saudi program, likely had the most up-close view of the coronavirus impact. Valles was on leave from Saudi Arabia when travel restrictions began to be implemented throughout the United States and the world. She was unable to return to her duties in Saudi Arabia and had to begin a 14-day quarantine. Immediately following the quarantine, she deployed to New York City, at the time one of the epicenters of the virus, to assist with USACE alternate care facility assessments. “I was on leave in Greece with my family when Europe was declared a level 3 travel threat. Within two days of that declaration, the Kingdom of Saudi Arabia closed its borders and I was unable to return. I came back to the states and entered a 14-day quarantine. I spent 14 days watching the news every day and feeling helpless, so I was extremely grateful to have the opportunity to go to New York and make an impact. What a historic way to see the city for the first time,” said Valles. In addition to Valles, several engineers and other technical professionals from TAM worked outside their normal mission set assisting USACE’s Norfolk District with assessments in northern Virginia. “With USACE once again being called to engineer solutions to our nation’s toughest challenges, specifically assessing and converting facilities into alternate care facilities, there was a high demand for certain technical skills. Within TAM, many teammates expressed their interest in assisting USACE’s COVID-19 response; so when Norfolk District requested assistance, we had team members chomping at the bit to serve,” said Secrist.

Right: Naval Support Activity Bahrain (NSAB) along with personnel from the U.S. Army Corps of Engineers (USACE) and the Bureau of Navy Medicine held a ribbon-cutting ceremony for a new medical and dental clinic on NSAB. The new 56,000-square-foot facility will substantially increase medical capacities and capabilities for sailors and their families stationed in Bahrain. Construction was overseen by USACE and completed in December 2019. Below right: One of the most important things within the division is sustaining the relationships they’ve built with their allied nation partners, whether that’s in Winchester, Virginia, or in the Middle East.

While the COVID pandemic will likely continue to impact operations for some time to come, the relationships and expertise that have sustained the Middle East District for almost seven decades will most certainly weather the storm as TAM continues building strong throughout the region. n

POWERING UP A COUNTRY, ONE TOWER AT A TIME BY LYNDA YE Z ZI, Transatlantic Division Public Af fairs

ffordable, reliable electricity is fundamental to modern life. Electricity lights the dark, cools and heats homes, powers life-saving and life-giving medical treatment facilities, is the foundation for industry development, and provides the pathway into the digital roads of finance, banking, and commerce that are traveled billions of times a day across the globe. In 2002, only 6% of Afghans had access to reliable electricity, according to estimates from the U.S. Agency for International Development (USAID). Today, that number has increased to approximately 43% – and that number is growing – thanks to the men and women of the U.S. Army Corps of Engineers (USACE) Transatlantic Afghanistan District (TAA),

who have spent the past decade supporting the overall Afghanistan electrification program with a series of electrical towers and transmission lines constructed by USACE under the Northern Electrical Power System (NEPS) and the Southern Electrical Power System (SEPS). They are part of a rotating team of Army Soldiers and Department of the Army civil service volunteers engaged in a country-wide effort to improve the lives of Afghan citizens, improve the security and stability of the region, and spur economic growth and development. This multipronged and multinational effort includes completion of the national power grid for the country of Afghanistan. The $827 million program, comprised of the NEPS and the SEPS, was funded 121