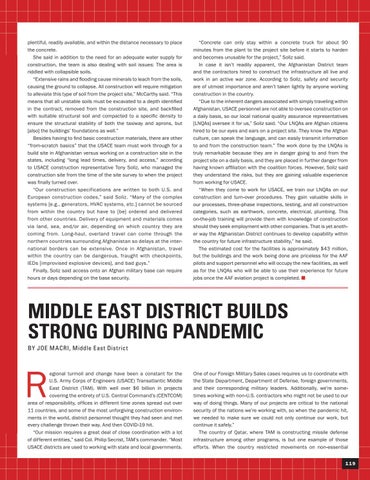 plentiful, readily available, and within the distance necessary to place the concrete. She said in addition to the need for an adequate water supply for construction, the team is also dealing with soil issues: The area is riddled with collapsible soils. “Extensive rains and flooding cause minerals to leach from the soils, causing the ground to collapse. All construction will require mitigation to alleviate this type of soil from the project site,” McCarthy said. “This means that all unstable soils must be excavated to a depth identified in the contract, removed from the construction site, and backfilled with suitable structural soil and compacted to a specific density to ensure the structural stability of both the taxiway and aprons, but [also] the buildings’ foundations as well.” Besides having to find basic construction materials, there are other “from-scratch basics” that the USACE team must work through for a build site in Afghanistan versus working on a construction site in the states, including “long lead times, delivery, and access,” according to USACE construction representative Tony Soliz, who managed the construction site from the time of the site survey to when the project was finally turned over. “Our construction specifications are written to both U.S. and European construction codes,” said Soliz. “Many of the complex systems [e.g., generators, HVAC systems, etc.] cannot be sourced from within the country but have to [be] ordered and delivered from other countries. Delivery of equipment and materials comes via land, sea, and/or air, depending on which country they are coming from. Long-haul, overland travel can come through the northern countries surrounding Afghanistan so delays at the international borders can be extensive. Once in Afghanistan, travel within the country can be dangerous, fraught with checkpoints, IEDs [improvised explosive devices], and bad guys.” Finally, Soliz said access onto an Afghan military base can require hours or days depending on the base security.

“Concrete can only stay within a concrete truck for about 90 minutes from the plant to the project site before it starts to harden and becomes unusable for the project,” Soliz said. In case it isn’t readily apparent, the Afghanistan District team and the contractors hired to construct the infrastructure all live and work in an active war zone. According to Soliz, safety and security are of utmost importance and aren’t taken lightly by anyone working construction in the country. “Due to the inherent dangers associated with simply traveling within Afghanistan, USACE personnel are not able to oversee construction on a daily basis, so our local national quality assurance representatives [LNQAs] oversee it for us,” Soliz said. “Our LNQAs are Afghan citizens hired to be our eyes and ears on a project site. They know the Afghan culture, can speak the language, and can easily transmit information to and from the construction team.” The work done by the LNQAs is truly remarkable because they are in danger going to and from the project site on a daily basis, and they are placed in further danger from having known affiliation with the coalition forces. However, Soliz said they understand the risks, but they are gaining valuable experience from working for USACE. “When they come to work for USACE, we train our LNQAs on our construction and turn-over procedures. They gain valuable skills in our processes, three-phase inspections, testing, and all construction categories, such as earthwork, concrete, electrical, plumbing. This on-the-job training will provide them with knowledge of construction should they seek employment with other companies. That is yet another way the Afghanistan District continues to develop capability within the country for future infrastructure stability,” he said. The estimated cost for the facilities is approximately $43 million, but the buildings and the work being done are priceless for the AAF pilots and support personnel who will occupy the new facilities, as well as for the LNQAs who will be able to use their experience for future jobs once the AAF aviation project is completed. n

egional turmoil and change have been a constant for the U.S. Army Corps of Engineers (USACE) Transatlantic Middle East District (TAM). With well over $6 billion in projects covering the entirety of U.S. Central Command’s (CENTCOM) area of responsibility, offices in different time zones spread out over 11 countries, and some of the most unforgiving construction environments in the world, district personnel thought they had seen and met every challenge thrown their way. And then COVID-19 hit. “Our mission requires a great deal of close coordination with a lot of different entities,” said Col. Philip Secrist, TAM’s commander. “Most USACE districts are used to working with state and local governments.

One of our Foreign Military Sales cases requires us to coordinate with the State Department, Department of Defense, foreign governments, and their corresponding military leaders. Additionally, we’re sometimes working with non-U.S. contractors who might not be used to our way of doing things. Many of our projects are critical to the national security of the nations we’re working with, so when the pandemic hit, we needed to make sure we could not only continue our work, but continue it safely.” The country of Qatar, where TAM is constructing missile defense infrastructure among other programs, is but one example of those efforts. When the country restricted movements on non-essential 119