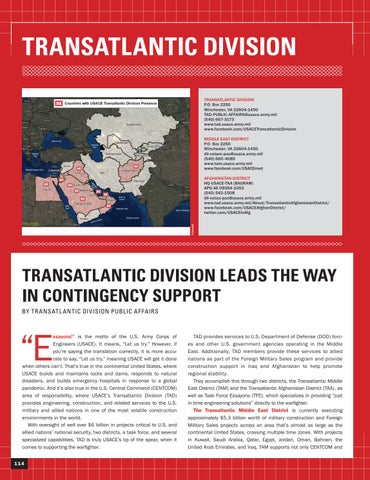 ssayons!” is the motto of the U.S. Army Corps of Engineers (USACE). It means, “Let us try.” However, if you’re saying the translation correctly, it is more accurate to say, “Let us try,” meaning USACE will get it done when others can’t. That’s true in the continental United States, where USACE builds and maintains locks and dams, responds to natural disasters, and builds emergency hospitals in response to a global pandemic. And it’s also true in the U.S. Central Command (CENTCOM) area of responsibility, where USACE’s Transatlantic Division (TAD) provides engineering, construction, and related services to the U.S. military and allied nations in one of the most volatile construction environments in the world. With oversight of well over $6 billion in projects critical to U.S. and allied nations’ national security, two districts, a task force, and several specialized capabilities, TAD is truly USACE’s tip of the spear, when it comes to supporting the warfighter.

TAD provides services to U.S. Department of Defense (DOD) forces and other U.S. government agencies operating in the Middle East. Additionally, TAD members provide these services to allied nations as part of the Foreign Military Sales program and provide construction support in Iraq and Afghanistan to help promote regional stability. They accomplish this through two districts, the Transatlantic Middle East District (TAM) and the Transatlantic Afghanistan District (TAA), as well as Task Force Essayons (TFE), which specializes in providing “just in time engineering solutions” directly to the warfighter. The Transatlantic Middle East District is currently executing approximately $5.3 billion worth of military construction and Foreign Military Sales projects across an area that’s almost as large as the continental United States, crossing multiple time zones. With projects in Kuwait, Saudi Arabia, Qatar, Egypt, Jordan, Oman, Bahrain, the United Arab Emirates, and Iraq, TAM supports not only CENTCOM and