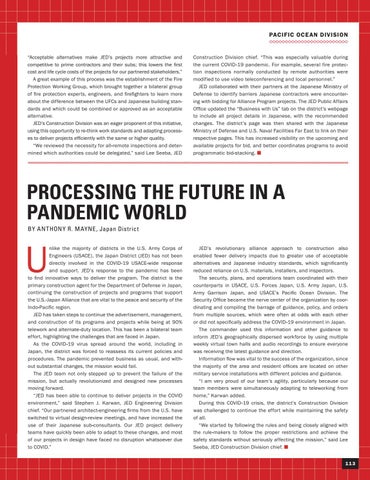 “Acceptable alternatives make JED’s projects more attractive and competitive to prime contractors and their subs; this lowers the first cost and life cycle costs of the projects for our partnered stakeholders.” A great example of this process was the establishment of the Fire Protection Working Group, which brought together a bilateral group of fire protection experts, engineers, and firefighters to learn more about the difference between the UFCs and Japanese building standards and which could be combined or approved as an acceptable alternative. JED’s Construction Division was an eager proponent of this initiative, using this opportunity to re-think work standards and adapting processes to deliver projects efficiently with the same or higher quality. “We reviewed the necessity for all-remote inspections and determined which authorities could be delegated,” said Lee Seeba, JED

Construction Division chief. “This was especially valuable during the current COVID-19 pandemic. For example, several fire protection inspections normally conducted by remote authorities were modified to use video teleconferencing and local personnel.” JED collaborated with their partners at the Japanese Ministry of Defense to identify barriers Japanese contractors were encountering with bidding for Alliance Program projects. The JED Public Affairs Office updated the “Business with Us” tab on the district’s webpage to include all project details in Japanese, with the recommended changes. The district’s page was then shared with the Japanese Ministry of Defense and U.S. Naval Facilities Far East to link on their respective pages. This has increased visibility on the upcoming and available projects for bid, and better coordinates programs to avoid programmatic bid-stacking. n

PROCESSING THE FUTURE IN A PANDEMIC WORLD BY ANTHONY R. MAYNE, Japan District

nlike the majority of districts in the U.S. Army Corps of Engineers (USACE), the Japan District (JED) has not been directly involved in the COVID-19 USACE-wide response and support. JED’s response to the pandemic has been to find innovative ways to deliver the program. The district is the primary construction agent for the Department of Defense in Japan, continuing the construction of projects and programs that support the U.S.-Japan Alliance that are vital to the peace and security of the Indo-Pacific region. JED has taken steps to continue the advertisement, management, and construction of its programs and projects while being at 90% telework and alternate-duty location. This has been a bilateral team effort, highlighting the challenges that are faced in Japan. As the COVID-19 virus spread around the world, including in Japan, the district was forced to reassess its current policies and procedures. The pandemic prevented business as usual, and without substantial changes, the mission would fail. The JED team not only stepped up to prevent the failure of the mission, but actually revolutionized and designed new processes moving forward. “JED has been able to continue to deliver projects in the COVID environment,” said Stephen J. Karwan, JED Engineering Division chief. “Our partnered architect-engineering firms from the U.S. have switched to virtual design-review meetings, and have increased the use of their Japanese sub-consultants. Our JED project delivery teams have quickly been able to adapt to these changes, and most of our projects in design have faced no disruption whatsoever due to COVID.”

JED’s revolutionary alliance approach to construction also enabled fewer delivery impacts due to greater use of acceptable alternatives and Japanese industry standards, which significantly reduced reliance on U.S. materials, installers, and inspectors. The security, plans, and operations team coordinated with their counterparts in USACE, U.S. Forces Japan, U.S. Army Japan, U.S. Army Garrison Japan, and USACE’s Pacific Ocean Division. The Security Office became the nerve center of the organization by coordinating and compiling the barrage of guidance, policy, and orders from multiple sources, which were often at odds with each other or did not specifically address the COVID-19 environment in Japan. The commander used this information and other guidance to inform JED’s geographically dispersed workforce by using multiple weekly virtual town halls and audio recordings to ensure everyone was receiving the latest guidance and direction. Information flow was vital to the success of the organization, since the majority of the area and resident offices are located on other military service installations with different policies and guidance. “I am very proud of our team’s agility, particularly because our team members were simultaneously adapting to teleworking from home,” Karwan added. During this COVID-19 crisis, the district’s Construction Division was challenged to continue the effort while maintaining the safety of all. “We started by following the rules and being closely aligned with the rule-makers to follow the proper restrictions and achieve the safety standards without seriously affecting the mission,” said Lee Seeba, JED Construction Division chief. n 113