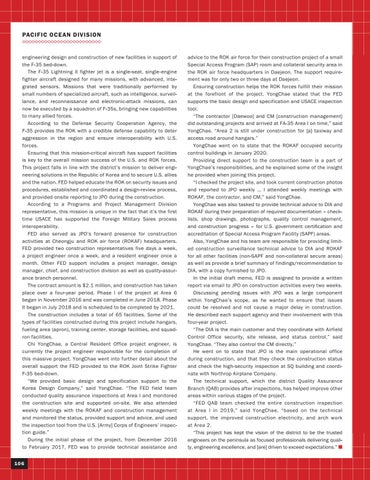 engineering design and construction of new facilities in support of the F-35 bed-down. The F-35 Lightning II fighter jet is a single-seat, single-engine fighter aircraft designed for many missions, with advanced, integrated sensors. Missions that were traditionally performed by small numbers of specialized aircraft, such as intelligence, surveillance, and reconnaissance and electronic-attack missions, can now be executed by a squadron of F-35s, bringing new capabilities to many allied forces. According to the Defense Security Cooperation Agency, the F-35 provides the ROK with a credible defense capability to deter aggression in the region and ensure interoperability with U.S. forces. Ensuring that this mission-critical aircraft has support facilities is key to the overall mission success of the U.S. and ROK forces. This project falls in line with the district’s mission to deliver engineering solutions in the Republic of Korea and to secure U.S. allies and the nation. FED helped educate the ROK on security issues and procedures, established and coordinated a design-review process, and provided onsite reporting to JPO during the construction. According to a Programs and Project Management Division representative, this mission is unique in the fact that it’s the first time USACE has supported the Foreign Military Sales process interoperability. FED also served as JPO’s forward presence for construction activities at Cheongju and ROK air force (ROKAF) headquarters. FED provided two construction representatives five days a week, a project engineer once a week, and a resident engineer once a month. Other FED support includes a project manager, design manager, chief, and construction division as well as quality-assurance branch personnel. The contract amount is $2.1 million, and construction has taken place over a four-year period. Phase I of the project at Area 6 began in November 2016 and was completed in June 2018. Phase II began in July 2018 and is scheduled to be completed by 2021. The construction includes a total of 65 facilities. Some of the types of facilities constructed during this project include hangars, fueling area (apron), training center, storage facilities, and squadron facilities. Chi YongChae, a Central Resident Office project engineer, is currently the project engineer responsible for the completion of this massive project. YongChae went into further detail about the overall support the FED provided to the ROK Joint Strike Fighter F-35 bed-down. “We provided basic design and specification support to the Korea Design Company,” said YongChae. “The FED field team conducted quality assurance inspections at Area I and monitored the construction site and supported on-site. We also attended weekly meetings with the ROKAF and construction management and monitored the status, provided support and advice, and used the inspection tool from the U.S. [Army] Corps of Engineers’ inspection guide.” During the initial phase of the project, from December 2016 to February 2017, FED was to provide technical assistance and 106

advice to the ROK air force for their construction project of a small Special Access Program (SAP) room and collateral security area in the ROK air force headquarters in Daejeon. The support requirement was for only two or three days at Daejeon. Ensuring construction helps the ROK forces fulfill their mission at the forefront of the project. YongChae stated that the FED supports the basic design and specification and USACE inspection tool. “The contractor [Daewoo] and CM [construction management] did outstanding projects and arrived at FA-35 Area I on time,” said YongChae. “Area 2 is still under construction for [a] taxiway and access road around hangars.” YongChae went on to state that the ROKAF occupied security control buildings in January 2020. Providing direct support to the construction team is a part of YongChae’s responsibilities, and he explained some of the insight he provided when joining this project. “I checked the project site, and took current construction photos and reported to JPO weekly … I attended weekly meetings with ROKAF, the contractor, and CM,” said YongChae. YongChae was also tasked to provide technical advice to DIA and ROKAF during their preparation of required documentation – checklists, shop drawings, photographs, quality control management, and construction progress – for U.S. government certification and accreditation of Special Access Program Facility (SAPF) areas. Also, YongChae and his team are responsible for providing limited construction surveillance technical advice to DIA and ROKAF for all other facilities (non-SAPF and non-collateral secure areas) as well as provide a brief summary of findings/recommendation to DIA, with a copy furnished to JPO. In the initial draft memo, FED is assigned to provide a written report via email to JPO on construction activities every two weeks. Discussing pending issues with JPO was a large component within YongChae’s scope, as he wanted to ensure that issues could be resolved and not cause a major delay in construction. He described each support agency and their involvement with this four-year project. “The DIA is the main customer and they coordinate with Airfield Control Office security, site release, and status control,” said YongChae. “They also control the CM directly.” He went on to state that JPO is the main operational office during construction, and that they check the construction status and check the high-security inspection at SQ building and coordinate with Northrop Airplane Company. The technical support, which the district Quality Assurance Branch (QAB) provides after inspections, has helped improve other areas within various stages of the project. “FED QAB team checked the entire construction inspection at Area I in 2019,” said YongChae, “based on the technical support, the improved construction electricity, and arch work at Area 2. “This project has kept the vision of the district to be the trusted engineers on the peninsula as focused professionals delivering quality, engineering excellence, and [are] driven to exceed expectations.” n