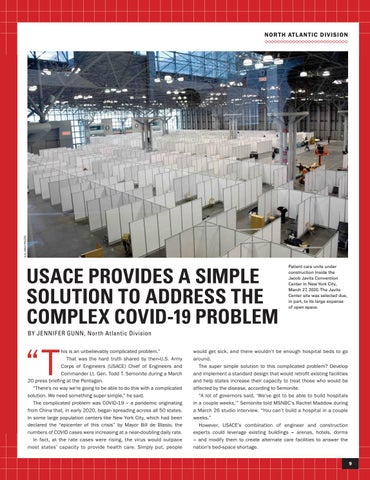 Patient care units under construction inside the Jacob Javits Convention Center in New York City, March 27, 2020. The Javits Center site was selected due, in part, to its large expanse of open space.

his is an unbelievably complicated problem.” That was the hard truth shared by then-U.S. Army Corps of Engineers (USACE) Chief of Engineers and Commander Lt. Gen. Todd T. Semonite during a March 20 press briefing at the Pentagon. “There’s no way we’re going to be able to do this with a complicated solution. We need something super simple,” he said. The complicated problem was COVID-19 – a pandemic originating from China that, in early 2020, began spreading across all 50 states. In some large population centers like New York City, which had been declared the “epicenter of this crisis” by Mayor Bill de Blasio, the numbers of COVID cases were increasing at a near-doubling daily rate. In fact, at the rate cases were rising, the virus would outpace most states’ capacity to provide health care. Simply put, people

would get sick, and there wouldn’t be enough hospital beds to go around. The super simple solution to this complicated problem? Develop and implement a standard design that would retrofit existing facilities and help states increase their capacity to treat those who would be affected by the disease, according to Semonite. “A lot of governors said, ‘We’ve got to be able to build hospitals in a couple weeks,’” Semonite told MSNBC’s Rachel Maddow during a March 26 studio interview. “You can’t build a hospital in a couple weeks.” However, USACE’s combination of engineer and construction experts could leverage existing buildings – arenas, hotels, dorms – and modify them to create alternate care facilities to answer the nation’s bed-space shortage. 9