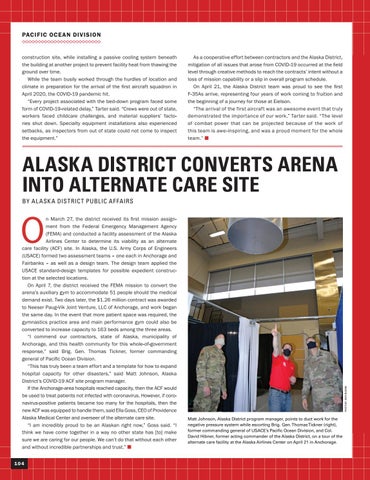 construction site, while installing a passive cooling system beneath the building at another project to prevent facility heat from thawing the ground over time. While the team busily worked through the hurdles of location and climate in preparation for the arrival of the first aircraft squadron in April 2020, the COVID-19 pandemic hit. “Every project associated with the bed-down program faced some form of COVID-19-related delay,” Tarter said. “Crews were out of state, workers faced childcare challenges, and material suppliers’ factories shut down. Specialty equipment installations also experienced setbacks, as inspectors from out of state could not come to inspect the equipment.”

As a cooperative effort between contractors and the Alaska District, mitigation of all issues that arose from COVID-19 occurred at the field level through creative methods to reach the contracts’ intent without a loss of mission capability or a slip in overall program schedule. On April 21, the Alaska District team was proud to see the first F-35As arrive, representing four years of work coming to fruition and the beginning of a journey for those at Eielson. “The arrival of the first aircraft was an awesome event that truly demonstrated the importance of our work,” Tarter said. “The level of combat power that can be projected because of the work of this team is awe-inspiring, and was a proud moment for the whole team.” n

n March 27, the district received its first mission assignment from the Federal Emergency Management Agency (FEMA) and conducted a facility assessment of the Alaska Airlines Center to determine its viability as an alternate care facility (ACF) site. In Alaska, the U.S. Army Corps of Engineers (USACE) formed two assessment teams – one each in Anchorage and Fairbanks – as well as a design team. The design team applied the USACE standard-design templates for possible expedient construction at the selected locations. On April 7, the district received the FEMA mission to convert the arena’s auxiliary gym to accommodate 51 people should the medical demand exist. Two days later, the $1.26 million contract was awarded to Neeser Paug-Vik Joint Venture, LLC of Anchorage, and work began the same day. In the event that more patient space was required, the gymnastics practice area and main performance gym could also be converted to increase capacity to 163 beds among the three areas. “I commend our contractors, state of Alaska, municipality of Anchorage, and this health community for this whole-of-government response,” said Brig. Gen. Thomas Tickner, former commanding general of Pacific Ocean Division. “This has truly been a team effort and a template for how to expand hospital capacity for other disasters,” said Matt Johnson, Alaska District’s COVID-19 ACF site program manager. If the Anchorage-area hospitals reached capacity, then the ACF would be used to treat patients not infected with coronavirus. However, if coronavirus-positive patients became too many for the hospitals, then the new ACF was equipped to handle them, said Ella Goss, CEO of Providence Alaska Medical Center and overseer of the alternate care site. “I am incredibly proud to be an Alaskan right now,” Goss said. “I think we have come together in a way no other state has [to] make sure we are caring for our people. We can’t do that without each other and without incredible partnerships and trust.” n