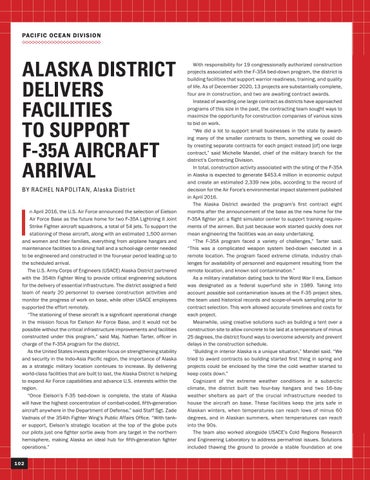 n April 2016, the U.S. Air Force announced the selection of Eielson Air Force Base as the future home for two F-35A Lightning II Joint Strike Fighter aircraft squadrons, a total of 54 jets. To support the stationing of these aircraft, along with an estimated 1,500 airmen and women and their families, everything from airplane hangars and maintenance facilities to a dining hall and a school-age center needed to be engineered and constructed in the four-year period leading up to the scheduled arrival. The U.S. Army Corps of Engineers (USACE) Alaska District partnered with the 354th Fighter Wing to provide critical engineering solutions for the delivery of essential infrastructure. The district assigned a field team of nearly 20 personnel to oversee construction activities and monitor the progress of work on base, while other USACE employees supported the effort remotely. “The stationing of these aircraft is a significant operational change in the mission focus for Eielson Air Force Base, and it would not be possible without the critical infrastructure improvements and facilities constructed under this program,” said Maj. Nathan Tarter, officer in charge of the F-35A program for the district. As the United States invests greater focus on strengthening stability and security in the Indo-Asia Pacific region, the importance of Alaska as a strategic military location continues to increase. By delivering world-class facilities that are built to last, the Alaska District is helping to expand Air Force capabilities and advance U.S. interests within the region. “Once Eielson’s F-35 bed-down is complete, the state of Alaska will have the highest concentration of combat-coded, fifth-generation aircraft anywhere in the Department of Defense,” said Staff Sgt. Zade Vadnais of the 354th Fighter Wing’s Public Affairs Office. “With tanker support, Eielson’s strategic location at the top of the globe puts our pilots just one fighter sortie away from any target in the northern hemisphere, making Alaska an ideal hub for fifth-generation fighter operations.”

With responsibility for 19 congressionally authorized construction projects associated with the F-35A bed-down program, the district is building facilities that support warrior readiness, training, and quality of life. As of December 2020, 13 projects are substantially complete, four are in construction, and two are awaiting contract awards. Instead of awarding one large contract as districts have approached programs of this size in the past, the contracting team sought ways to maximize the opportunity for construction companies of various sizes to bid on work. “We did a lot to support small businesses in the state by awarding many of the smaller contracts to them, something we could do by creating separate contracts for each project instead [of] one large contract,” said Michelle Mandel, chief of the military branch for the district’s Contracting Division. In total, construction activity associated with the siting of the F-35A in Alaska is expected to generate $453.4 million in economic output and create an estimated 2,339 new jobs, according to the record of decision for the Air Force’s environmental impact statement published in April 2016. The Alaska District awarded the program’s first contract eight months after the announcement of the base as the new home for the F-35A fighter jet: a flight simulator center to support training requirements of the airmen. But just because work started quickly does not mean engineering the facilities was an easy undertaking. “The F-35A program faced a variety of challenges,” Tarter said. “This was a complicated weapon system bed-down executed in a remote location. The program faced extreme climate, industry challenges for availability of personnel and equipment resulting from the remote location, and known soil contamination.” As a military installation dating back to the Word War II era, Eielson was designated as a federal superfund site in 1989. Taking into account possible soil contamination issues at the F-35 project sites, the team used historical records and scope-of-work sampling prior to contract selection. This work allowed accurate timelines and costs for each project. Meanwhile, using creative solutions such as building a tent over a construction site to allow concrete to be laid at a temperature of minus 25 degrees, the district found ways to overcome adversity and prevent delays in the construction schedule. “Building in interior Alaska is a unique situation,” Mandel said. “We tried to award contracts so building started first thing in spring and projects could be enclosed by the time the cold weather started to keep costs down.” Cognizant of the extreme weather conditions in a subarctic climate, the district built two four-bay hangars and two 16-bay weather shelters as part of the crucial infrastructure needed to house the aircraft on base. These facilities keep the jets safe in Alaskan winters, when temperatures can reach lows of minus 60 degrees, and in Alaskan summers, when temperatures can reach into the 90s. The team also worked alongside USACE’s Cold Regions Research and Engineering Laboratory to address permafrost issues. Solutions included thawing the ground to provide a stable foundation at one