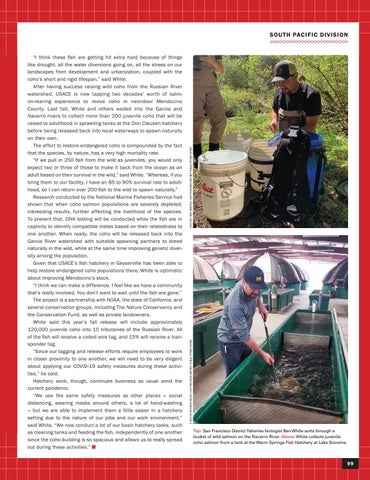 “I think these fish are getting hit extra hard because of things like drought, all the water diversions going on, all the stress on our landscapes from development and urbanization, coupled with the coho’s short and rigid lifespan,” said White. After having success raising wild coho from the Russian River watershed, USACE is now tapping two decades’ worth of salmon-rearing experience to revive coho in next-door Mendocino County. Last fall, White and others waded into the Garcia and Navarro rivers to collect more than 200 juvenile coho that will be raised to adulthood in sprawling tanks at the Don Clausen hatchery before being released back into local waterways to spawn naturally on their own. The effort to restore endangered coho is compounded by the fact that the species, by nature, has a very high mortality rate. “If we pull in 250 fish from the wild as juveniles, you would only expect two or three of those to make it back from the ocean as an adult based on their survival in the wild,” said White. “Whereas, if you bring them to our facility, I have an 85 to 90% survival rate to adulthood, so I can return over 200 fish to the wild to spawn naturally.” Research conducted by the National Marine Fisheries Service had shown that when coho salmon populations are severely depleted, inbreeding results, further affecting the livelihood of the species. To prevent that, DNA testing will be conducted while the fish are in captivity to identify compatible mates based on their relatedness to one another. When ready, the coho will be released back into the Garcia River watershed with suitable spawning partners to breed naturally in the wild, while at the same time improving genetic diversity among the population. Given that USACE’s fish hatchery in Geyserville has been able to help restore endangered coho populations there, White is optimistic about improving Mendocino’s stock. “I think we can make a difference. I feel like we have a community that’s really involved. You don’t want to wait until the fish are gone.” The project is a partnership with NOAA, the state of California, and several conservation groups, including The Nature Conservancy and the Conservation Fund, as well as private landowners. White said this year’s fall release will include approximately 120,000 juvenile coho into 15 tributaries of the Russian River. All of the fish will receive a coded wire tag, and 15% will receive a transponder tag. “Since our tagging and release efforts require employees to work in closer proximity to one another, we will need to be very diligent about applying our COVID-19 safety measures during these activities,” he said. Hatchery work, though, continues business as usual amid the current pandemic. “We use the same safety measures as other places – social distancing, wearing masks around others, a lot of hand-washing – but we are able to implement them a little easier in a hatchery setting due to the nature of our jobs and our work environment,” said White. “We now conduct a lot of our basic hatchery tasks, such as cleaning tanks and feeding the fish, independently of one another since the coho building is so spacious and allows us to really spread out during these activities.” n