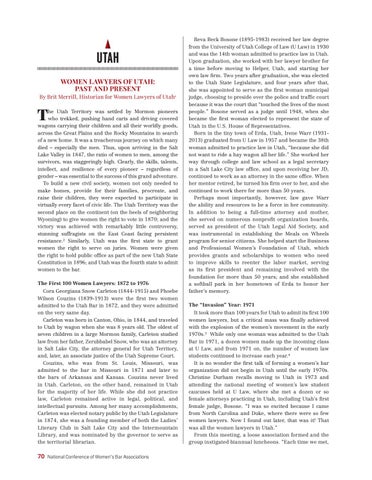 UTAH WOMEN LAWYERS OF UTAH: PAST AND PRESENT By Brit Merrill, Historian for Women Lawyers of Utah 1

he Utah Territory was settled by Mormon pioneers who trekked, pushing hand carts and driving covered wagons carrying their children and all their worldly goods, across the Great Plains and the Rocky Mountains in search of a new home. It was a treacherous journey on which many died – especially the men. Thus, upon arriving in the Salt Lake Valley in 1847, the ratio of women to men, among the survivors, was staggeringly high. Clearly, the skills, talents, intellect, and resilience of every pioneer – regardless of gender – was essential to the success of this grand adventure. To build a new civil society, women not only needed to make homes, provide for their families, procreate, and raise their children, they were expected to participate in virtually every facet of civic life. The Utah Territory was the second place on the continent (on the heels of neighboring Wyoming) to give women the right to vote in 1870; and the victory was achieved with remarkably little controversy, stunning suffragists on the East Coast facing persistent resistance.2 Similarly, Utah was the first state to grant women the right to serve on juries. Women were given the right to hold public office as part of the new Utah State Constitution in 1896; and Utah was the fourth state to admit women to the bar. The First 100 Women Lawyers: 1872 to 1976 Cora Georgiana Snow Carleton (1844-1915) and Phoebe Wilson Couzins (1839-1913) were the first two women admitted to the Utah Bar in 1872, and they were admitted on the very same day. Carleton was born in Canton, Ohio, in 1844, and traveled to Utah by wagon when she was 8 years old. The oldest of seven children in a large Mormon family, Carleton studied law from her father, Zerubbabel Snow, who was an attorney in Salt Lake City, the attorney general for Utah Territory, and, later, an associate justice of the Utah Supreme Court. Couzins, who was from St. Louis, Missouri, was admitted to the bar in Missouri in 1871 and later to the bars of Arkansas and Kansas. Couzins never lived in Utah. Carleton, on the other hand, remained in Utah for the majority of her life. While she did not practice law, Carleton remained active in legal, political, and intellectual pursuits. Among her many accomplishments, Carleton was elected notary public by the Utah Legislature in 1874, she was a founding member of both the Ladies’ Literary Club in Salt Lake City and the Intermountain Library, and was nominated by the governor to serve as the territorial librarian.

Reva Beck Bosone (1895-1983) received her law degree from the University of Utah College of Law (U Law) in 1930 and was the 14th woman admitted to practice law in Utah. Upon graduation, she worked with her lawyer brother for a time before moving to Helper, Utah, and starting her own law firm. Two years after graduation, she was elected to the Utah State Legislature, and four years after that, she was appointed to serve as the first woman municipal judge, choosing to preside over the police and traffic court because it was the court that “touched the lives of the most people.” Bosone served as a judge until 1948, when she became the first woman elected to represent the state of Utah in the U.S. House of Representatives. Born in the tiny town of Erda, Utah, Irene Warr (19312013) graduated from U Law in 1957 and became the 38th woman admitted to practice law in Utah, “because she did not want to ride a hay wagon all her life.” She worked her way through college and law school as a legal secretary in a Salt Lake City law office, and upon receiving her JD, continued to work as an attorney in the same office. When her mentor retired, he turned his firm over to her, and she continued to work there for more than 50 years. Perhaps most importantly, however, law gave Warr the ability and resources to be a force in her community. In addition to being a full-time attorney and mother, she served on numerous nonprofit organization boards, served as president of the Utah Legal Aid Society, and was instrumental in establishing the Meals on Wheels program for senior citizens. She helped start the Business and Professional Women’s Foundation of Utah, which provides grants and scholarships to women who need to improve skills to reenter the labor market, serving as its first president and remaining involved with the foundation for more than 50 years; and she established a softball park in her hometown of Erda to honor her father’s memory. The “Invasion” Year: 1971 It took more than 100 years for Utah to admit its first 100 women lawyers, but a critical mass was finally achieved with the explosion of the women’s movement in the early 1970s.3 While only one woman was admitted to the Utah Bar in 1971, a dozen women made up the incoming class at U Law, and from 1971 on, the number of women law students continued to increase each year.4 It is no wonder the first talk of forming a women’s bar organization did not begin in Utah until the early 1970s. Christine Durham recalls moving to Utah in 1973 and attending the national meeting of women’s law student caucuses held at U Law, where she met a dozen or so female attorneys practicing in Utah, including Utah’s first female judge, Bosone. “I was so excited because I came from North Carolina and Duke, where there were so few women lawyers. Now I found out later, that was it! That was all the women lawyers in Utah.” From this meeting, a loose association formed and the group instigated biannual luncheons. “Each time we met,