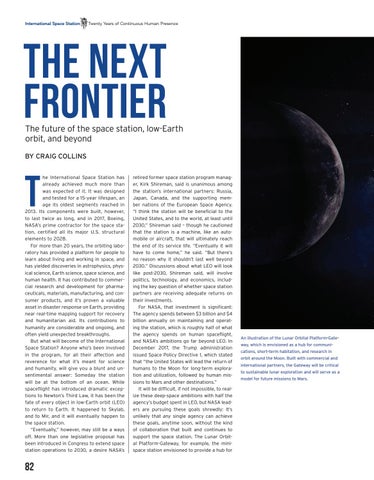 The future of the space station, low-Earth orbit, and beyond

he International Space Station has already achieved much more than was expected of it. It was designed and tested for a 15-year lifespan, an age its oldest segments reached in 2013. Its components were built, however, to last twice as long, and in 2017, Boeing, NASA’s prime contractor for the space station, certified all its major U.S. structural elements to 2028. For more than 20 years, the orbiting laboratory has provided a platform for people to learn about living and working in space, and has yielded discoveries in astrophysics, physical science, Earth science, space science, and human health. It has contributed to commercial research and development for pharmaceuticals, materials, manufacturing, and consumer products, and it’s proven a valuable asset in disaster response on Earth, providing near real-time mapping support for recovery and humanitarian aid. Its contributions to humanity are considerable and ongoing, and often yield unexpected breakthroughs. But what will become of the International Space Station? Anyone who’s been involved in the program, for all their affection and reverence for what it’s meant for science and humanity, will give you a blunt and unsentimental answer: Someday the station will be at the bottom of an ocean. While spaceflight has introduced dramatic exceptions to Newton’s Third Law, it has been the fate of every object in low-Earth orbit (LEO) to return to Earth. It happened to Skylab, and to Mir, and it will eventually happen to the space station. “Eventually,” however, may still be a ways off. More than one legislative proposal has been introduced in Congress to extend space station operations to 2030, a desire NASA’s

retired former space station program manager, Kirk Shireman, said is unanimous among the station’s international partners: Russia, Japan, Canada, and the supporting member nations of the European Space Agency. “I think the station will be beneficial to the United States, and to the world, at least until 2030,” Shireman said – though he cautioned that the station is a machine, like an automobile or aircraft, that will ultimately reach the end of its service life. “Eventually it will have to come home,” he said. “But there’s no reason why it shouldn’t last well beyond 2030.” Discussions about what LEO will look like post-2030, Shireman said, will involve politics, technology, and economics, including the key question of whether space station partners are receiving adequate returns on their investments. For NASA, that investment is significant: The agency spends between $3 billion and $4 billion annually on maintaining and operating the station, which is roughly half of what the agency spends on human spaceflight, and NASA’s ambitions go far beyond LEO. In December 2017, the Trump administration issued Space Policy Directive 1, which stated that “the United States will lead the return of humans to the Moon for long-term exploration and utilization, followed by human missions to Mars and other destinations.” It will be difficult, if not impossible, to realize these deep-space ambitions with half the agency’s budget spent in LEO, but NASA leaders are pursuing these goals shrewdly: It’s unlikely that any single agency can achieve these goals, anytime soon, without the kind of collaboration that built and continues to support the space station. The Lunar Orbital Platform-Gateway, for example, the minispace station envisioned to provide a hub for

An illustration of the Lunar Orbital Platform-Gateway, which is envisioned as a hub for communications, short-term habitation, and research in orbit around the Moon. Built with commercial and international partners, the Gateway will be critical to sustainable lunar exploration and will serve as a model for future missions to Mars.