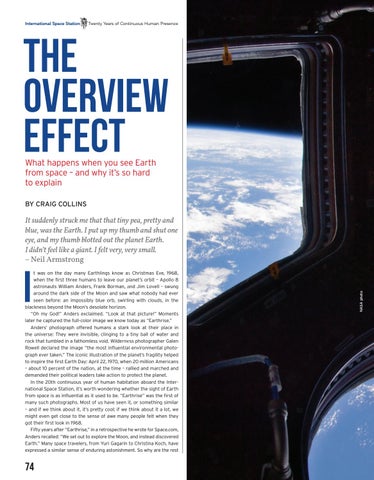 t was on the day many Earthlings know as Christmas Eve, 1968, when the first three humans to leave our planet’s orbit – Apollo 8 astronauts William Anders, Frank Borman, and Jim Lovell – swung around the dark side of the Moon and saw what nobody had ever seen before: an impossibly blue orb, swirling with clouds, in the blackness beyond the Moon’s desolate horizon. “Oh my God!” Anders exclaimed. “Look at that picture!” Moments later he captured the full-color image we know today as “Earthrise.” Anders’ photograph offered humans a stark look at their place in the universe: They were invisible, clinging to a tiny ball of water and rock that tumbled in a fathomless void. Wilderness photographer Galen Rowell declared the image “the most influential environmental photograph ever taken.” The iconic illustration of the planet’s fragility helped to inspire the first Earth Day: April 22, 1970, when 20 million Americans – about 10 percent of the nation, at the time – rallied and marched and demanded their political leaders take action to protect the planet. In the 20th continuous year of human habitation aboard the International Space Station, it’s worth wondering whether the sight of Earth from space is as influential as it used to be. “Earthrise” was the first of many such photographs. Most of us have seen it, or something similar – and if we think about it, it’s pretty cool; if we think about it a lot, we might even get close to the sense of awe many people felt when they got their first look in 1968. Fifty years after “Earthrise,” in a retrospective he wrote for Space.com, Anders recalled: “We set out to explore the Moon, and instead discovered Earth.” Many space travelers, from Yuri Gagarin to Christina Koch, have expressed a similar sense of enduring astonishment. So why are the rest

It suddenly struck me that that tiny pea, pretty and blue, was the Earth. I put up my thumb and shut one eye, and my thumb blotted out the planet Earth. I didn’t feel like a giant. I felt very, very small. – Neil Armstrong