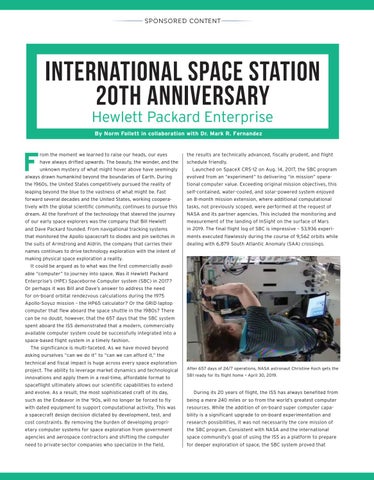 rom the moment we learned to raise our heads, our eyes

the results are technically advanced, fiscally prudent, and flight

have always drifted upwards. The beauty, the wonder, and the

unknown mystery of what might hover above have seemingly

always drawn humankind beyond the boundaries of Earth. During

evolved from an “experiment” to delivering “in mission” opera-

the 1960s, the United States competitively pursued the reality of

leaping beyond the blue to the vastness of what might be. Fast

tively with the global scientific community, continues to pursue this

tasks, not previously scoped, were performed at the request of

dream. At the forefront of the technology that steered the journey

NASA and its partner agencies. This included the monitoring and

of our early space explorers was the company that Bill Hewlett

measurement of the landing of InSight on the surface of Mars

that monitored the Apollo spacecraft to diodes and pin switches in

ments executed flawlessly during the course of 9,562 orbits while

the suits of Armstrong and Aldrin, the company that carries their

names continues to drive technology exploration with the intent of making physical space exploration a reality. It could be argued as to what was the first commercially available “computer” to journey into space. Was it Hewlett Packard Enterprise’s (HPE) Spaceborne Computer system (SBC) in 2017? Or perhaps it was Bill and Dave’s answer to address the need for on-board orbital rendezvous calculations during the 1975 Apollo-Soyuz mission – the HP65 calculator? Or the GRiD laptop computer that flew aboard the space shuttle in the 1980s? There can be no doubt, however, that the 657 days that the SBC system spent aboard the ISS demonstrated that a modern, commercially available computer system could be successfully integrated into a space-based flight system in a timely fashion. The significance is multi-faceted. As we have moved beyond asking ourselves “can we do it” to “can we can afford it,” the technical and fiscal impact is huge across every space exploration project. The ability to leverage market dynamics and technological

After 657 days of 24/7 operations, NASA astronaut Christine Koch gets the

innovations and apply them in a real-time, affordable format to

spaceflight ultimately allows our scientific capabilities to extend and evolve. As a result, the most sophisticated craft of its day,

During its 20 years of flight, the ISS has always benefited from

such as the Endeavor in the ‘90s, will no longer be forced to fly

with dated equipment to support computational activity. This was

resources. While the addition of on-board super computer capa-

a spacecraft design decision dictated by development, test, and

bility is a significant upgrade to on-board experimentation and

cost constraints. By removing the burden of developing propri-

research possibilities, it was not necessarily the core mission of

the SBC program. Consistent with NASA and the international

agencies and aerospace contractors and shifting the computer

need to private-sector companies who specialize in the field,

for deeper exploration of space, the SBC system proved that