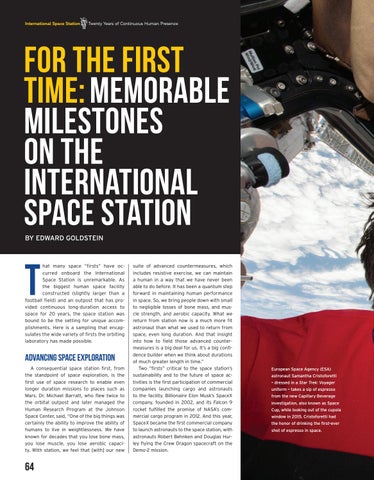 For the First Time: Memorable Milestones on the International Space Station BY EDWARD GOLDSTEIN

hat many space “firsts” have occurred onboard the International Space Station is unremarkable. As the biggest human space facility constructed (slightly larger than a football field) and an outpost that has provided continuous long-duration access to space for 20 years, the space station was bound to be the setting for unique accomplishments. Here is a sampling that encapsulates the wide variety of firsts the orbiting laboratory has made possible.

ADVANCING SPACE EXPLORATION A consequential space station first, from the standpoint of space exploration, is the first use of space research to enable even longer duration missions to places such as Mars. Dr. Michael Barratt, who flew twice to the orbital outpost and later managed the Human Research Program at the Johnson Space Center, said, “One of the big things was certainly the ability to improve the ability of humans to live in weightlessness. We have known for decades that you lose bone mass, you lose muscle, you lose aerobic capacity. With station, we feel that [with] our new

suite of advanced countermeasures, which includes resistive exercise, we can maintain a human in a way that we have never been able to do before. It has been a quantum step forward in maintaining human performance in space. So, we bring people down with small to negligible losses of bone mass, and muscle strength, and aerobic capacity. What we return from station now is a much more fit astronaut than what we used to return from space, even long duration. And that insight into how to field those advanced countermeasures is a big deal for us. It’s a big confidence builder when we think about durations of much greater length in time.” Two “firsts” critical to the space station’s sustainability and to the future of space activities is the first participation of commercial companies launching cargo and astronauts to the facility. Billionaire Elon Musk’s SpaceX company, founded in 2002, and its Falcon 9 rocket fulfilled the promise of NASA’s commercial cargo program in 2012. And this year, SpaceX became the first commercial company to launch astronauts to the space station, with astronauts Robert Behnken and Douglas Hurley flying the Crew Dragon spacecraft on the Demo-2 mission.

European Space Agency (ESA) astronaut Samantha Cristoforetti – dressed in a Star Trek: Voyager uniform – takes a sip of espresso from the new Capillary Beverage investigation, also known as Space Cup, while looking out of the cupola window in 2015. Cristoforetti had the honor of drinking the first-ever shot of espresso in space.