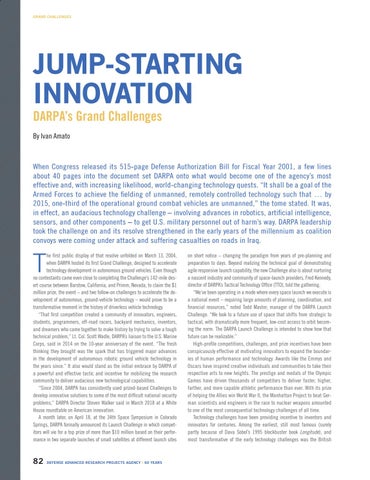 When Congress released its 515-page Defense Authorization Bill for Fiscal Year 2001, a few lines about 40 pages into the document set DARPA onto what would become one of the agency’s most effective and, with increasing likelihood, world-changing technology quests. “It shall be a goal of the Armed Forces to achieve the fielding of unmanned, remotely controlled technology such that … by 2015, one-third of the operational ground combat vehicles are unmanned,” the tome stated. It was, in effect, an audacious technology challenge – involving advances in robotics, artificial intelligence, sensors, and other components – to get U.S. military personnel out of harm’s way. DARPA leadership took the challenge on and its resolve strengthened in the early years of the millennium as coalition convoys were coming under attack and suffering casualties on roads in Iraq.

he first public display of that resolve unfolded on March 13, 2004, when DARPA hosted its first Grand Challenge, designed to accelerate technology development in autonomous ground vehicles. Even though no contestants came even close to completing the Challenge’s 142-mile desert course between Barstow, California, and Primm, Nevada, to claim the $1 million prize, the event – and two follow-on challenges to accelerate the development of autonomous, ground-vehicle technology – would prove to be a transformative moment in the history of driverless vehicle technology. “That first competition created a community of innovators, engineers, students, programmers, off-road racers, backyard mechanics, inventors, and dreamers who came together to make history by trying to solve a tough technical problem,” Lt. Col. Scott Wadle, DARPA’s liaison to the U.S. Marine Corps, said in 2014 on the 10-year anniversary of the event. “The fresh thinking they brought was the spark that has triggered major advances in the development of autonomous robotic ground vehicle technology in the years since.” It also would stand as the initial embrace by DARPA of a powerful and effective tactic and incentive for mobilizing the research community to deliver audacious new technological capabilities. “Since 2004, DARPA has consistently used prized-based Challenges to develop innovative solutions to some of the most difficult national security problems,” DARPA Director Steven Walker said in March 2018 at a White House roundtable on American innovation. A month later, on April 18, at the 34th Space Symposium in Colorado Springs, DARPA formally announced its Launch Challenge in which competitors will vie for a top prize of more than $10 million based on their performance in two separate launches of small satellites at different launch sites

on short notice – changing the paradigm from years of pre-planning and preparation to days. Beyond realizing the technical goal of demonstrating agile responsive launch capability, the new Challenge also is about nurturing a nascent industry and community of space-launch providers, Fred Kennedy, director of DARPA’s Tactical Technology Office (TTO), told the gathering. “We’ve been operating in a mode where every space launch we execute is a national event – requiring large amounts of planning, coordination, and financial resources,” noted Todd Master, manager of the DARPA Launch Challenge. “We look to a future use of space that shifts from strategic to tactical, with dramatically more frequent, low-cost access to orbit becoming the norm. The DARPA Launch Challenge is intended to show how that future can be realizable.” High-profile competitions, challenges, and prize incentives have been conspicuously effective at motivating innovators to expand the boundaries of human performance and technology. Awards like the Emmys and Oscars have inspired creative individuals and communities to take their respective arts to new heights. The prestige and medals of the Olympic Games have driven thousands of competitors to deliver faster, higher, farther, and more capable athletic performance than ever. With its prize of helping the Allies win World War II, the Manhattan Project to beat German scientists and engineers in the race to nuclear weapons amounted to one of the most consequential technology challenges of all time. Technology challenges have been providing incentive to inventors and innovators for centuries. Among the earliest, still most famous (surely partly because of Dava Sobel’s 1995 blockbuster book Longitude), and most transformative of the early technology challenges was the British