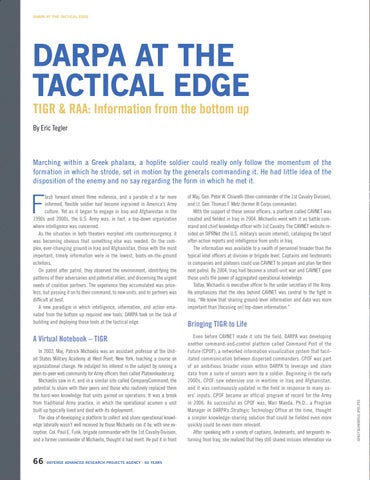 DARPA AT THE TACTICAL EDGE

DARPA AT THE TACTICAL EDGE TIGR & RAA: Information from the bottom up By Eric Tegler

Marching within a Greek phalanx, a hoplite soldier could really only follow the momentum of the formation in which he strode, set in motion by the generals commanding it. He had little idea of the disposition of the enemy and no say regarding the form in which he met it. of Maj. Gen. Peter W. Chiarelli (then-commander of the 1st Cavalry Division), and Lt. Gen. Thomas F. Metz (former III Corps commander). With the support of these senior officers, a platform called CAVNET was created and fielded in Iraq in 2004. Michaelis went with it as battle command and chief knowledge officer with 1st Cavalry. The CAVNET website resided on SIPRNet (the U.S. military’s secure internet), cataloging the latest after-action reports and intelligence from units in Iraq. The information was available to a swath of personnel broader than the typical intel officers at division or brigade level. Captains and lieutenants in companies and platoons could use CAVNET to prepare and plan for their next patrol. By 2004, Iraq had become a small-unit war and CAVNET gave those units the power of aggregated operational knowledge. Today, Michaelis is executive officer to the under secretary of the Army. He emphasizes that the idea behind CAVNET was central to the fight in Iraq. “We knew that sharing ground-level information and data was more important than [focusing on] top-down information.”

Even before CAVNET made it into the field, DARPA was developing another command-and-control platform called Command Post of the Future (CPOF), a networked information visualization system that facilitated communication between dispersed commanders. CPOF was part of an ambitious broader vision within DARPA to leverage and share data from a suite of sensors worn by a soldier. Beginning in the early 2000s, CPOF saw extensive use in wartime in Iraq and Afghanistan, and it was continuously updated in the field in response to many users’ inputs. CPOF became an official program of record for the Army in 2006. As successful as CPOF was, Mari Maeda, Ph.D., a Program Manager in DARPA’s Strategic Technology Office at the time, thought a simpler knowledge-sharing solution that could be fielded even more quickly could be even more relevant. After speaking with a variety of captains, lieutenants, and sergeants returning from Iraq, she realized that they still shared mission information via

In 2002, Maj. Patrick Michaelis was an assistant professor at the United States Military Academy at West Point, New York, teaching a course on organizational change. He indulged his interest in the subject by running a peer-to-peer web community for Army officers then called Platoonleader.org. Michaelis saw in it, and in a similar site called CompanyCommand, the potential to share with their peers and those who routinely replaced them the hard-won knowledge that units gained on operations. It was a break from traditional Army practice, in which the operational acumen a unit built up typically lived and died with its deployment. The idea of developing a platform to collect and share operational knowledge laterally wasn’t well received by those Michaelis ran it by, with one exception. Col. Paul E. Funk, brigade commander with the 1st Cavalry Division, and a former commander of Michaelis, thought it had merit. He put it in front

lash forward almost three millennia, and a parable of a far more informed, flexible soldier had become ingrained in America’s Army culture. Yet as it began to engage in Iraq and Afghanistan in the 1990s and 2000s, the U.S. Army was, in fact, a top-down organization where intelligence was concerned. As the situation in both theaters morphed into counterinsurgency, it was becoming obvious that something else was needed. On the complex, ever-changing ground in Iraq and Afghanistan, those with the most important, timely information were in the lowest, boots-on-the-ground echelons. On patrol after patrol, they observed the environment, identifying the patterns of their adversaries and potential allies, and discerning the urgent needs of coalition partners. The experience they accumulated was priceless, but passing it on to their command, to new units, and to partners was difficult at best. A new paradigm in which intelligence, information, and action emanated from the bottom up required new tools. DARPA took on the task of building and deploying those tools at the tactical edge.