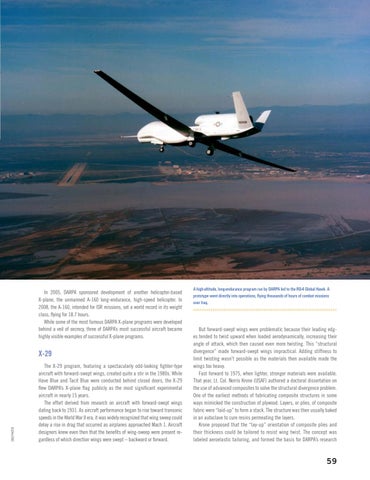 In 2005, DARPA sponsored development of another helicopter-based X-plane, the unmanned A-160 long-endurance, high-speed helicopter. In 2008, the A-160, intended for ISR missions, set a world record in its weight class, flying for 18.7 hours. While some of the most famous DARPA X-plane programs were developed behind a veil of secrecy, three of DARPA’s most successful aircraft became highly visible examples of successful X-plane programs.

X-29 The X-29 program, featuring a spectacularly odd-looking fighter-type aircraft with forward-swept wings, created quite a stir in the 1980s. While Have Blue and Tacit Blue were conducted behind closed doors, the X-29 flew DARPA’s X-plane flag publicly as the most significant experimental aircraft in nearly 15 years. The effort derived from research on aircraft with forward-swept wings dating back to 1931. As aircraft performance began to rise toward transonic speeds in the World War II era, it was widely recognized that wing sweep could delay a rise in drag that occurred as airplanes approached Mach 1. Aircraft designers knew even then that the benefits of wing-sweep were present regardless of which direction wings were swept – backward or forward.

A high-altitude, long-endurance program run by DARPA led to the RQ-4 Global Hawk. A prototype went directly into operations, flying thousands of hours of combat missions over Iraq.

But forward-swept wings were problematic because their leading edges tended to twist upward when loaded aerodynamically, increasing their angle of attack, which then caused even more twisting. This “structural divergence” made forward-swept wings impractical. Adding stiffness to limit twisting wasn’t possible as the materials then available made the wings too heavy. Fast forward to 1975, when lighter, stronger materials were available. That year, Lt. Col. Norris Krone (USAF) authored a doctoral dissertation on the use of advanced composites to solve the structural divergence problem. One of the earliest methods of fabricating composite structures in some ways mimicked the construction of plywood. Layers, or plies, of composite fabric were “laid-up” to form a stack. The structure was then usually baked in an autoclave to cure resins permeating the layers. Krone proposed that the “lay-up” orientation of composite plies and their thickness could be tailored to resist wing twist. The concept was labeled aeroelastic tailoring, and formed the basis for DARPA’s research