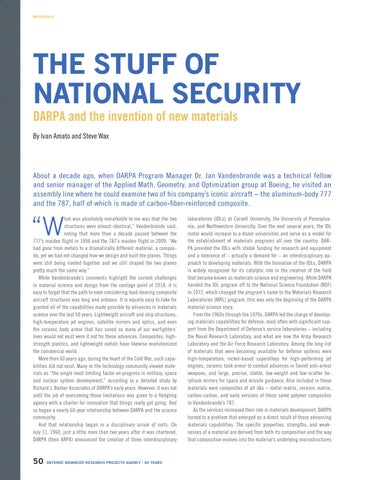 About a decade ago, when DARPA Program Manager Dr. Jan Vandenbrande was a technical fellow and senior manager of the Applied Math, Geometry, and Optimization group at Boeing, he visited an assembly line where he could examine two of his company’s iconic aircraft – the aluminum-body 777 and the 787, half of which is made of carbon-fiber-reinforced composite.

hat was absolutely remarkable to me was that the two structures were almost identical,” Vandenbrande said, noting that more than a decade passed between the 777’s maiden flight in 1994 and the 787’s maiden flight in 2009. “We had gone from metals to a dramatically different material, a composite, yet we had not changed how we design and built the planes. Things were still being riveted together and we still shaped the two planes pretty much the same way.” While Vandenbrande’s comments highlight the current challenges in material science and design from the vantage point of 2018, it is easy to forget that the path to even considering load-bearing composite aircraft structures was long and arduous. It is equally easy to take for granted all of the capabilities made possible by advances in materials science over the last 50 years. Lightweight aircraft and ship structures, high-temperature jet engines, satellite mirrors and optics, and even the ceramic body armor that has saved so many of our warfighters’ lives would not exist were it not for these advances. Composites, highstrength plastics, and lightweight metals have likewise revolutionized the commercial world. More than 60 years ago, during the heart of the Cold War, such capabilities did not exist. Many in the technology community viewed materials as “the single most limiting factor on progress in military, space and nuclear system development,” according to a detailed study by Richard J. Barber Associates of DARPA’s early years. However, it was not until the job of overcoming those limitations was given to a fledgling agency with a charter for innovation that things really got going. And so began a nearly 60-year relationship between DARPA and the science community. And that relationship began in a disciplinary scrum of sorts. On July 11, 1960, just a little more than two years after it was chartered, DARPA (then ARPA) announced the creation of three interdisciplinary

laboratories (IDLs) at Cornell University, the University of Pennsylvania, and Northwestern University. Over the next several years, the IDL roster would increase to a dozen universities and serve as a model for the establishment of materials programs all over the country. DARPA provided the IDLs with stable funding for research and equipment and a tolerance of – actually a demand for – an interdisciplinary approach to developing materials. With the formation of the IDLs, DARPA is widely recognized for its catalytic role in the creation of the field that became known as materials science and engineering. While DARPA handed the IDL program off to the National Science Foundation (NSF) in 1972, which changed the program’s name to the Materials Research Laboratories (MRL) program, this was only the beginning of the DARPA material science story. From the 1960s through the 1970s, DARPA led the charge of developing materials capabilities for defense, most often with significant support from the Department of Defense’s service laboratories – including the Naval Research Laboratory, and what are now the Army Research Laboratory and the Air Force Research Laboratory. Among the long list of materials that were becoming available for defense systems were high-temperature, nickel-based superalloys for high-performing jet engines, ceramic tank armor to combat advances in Soviet anti-armor weapons, and large, precise, stable, low-weight and low-scatter beryllium mirrors for space and missile guidance. Also included in these materials were composites of all ilks – metal matrix, ceramic matrix, carbon-carbon, and early versions of those same polymer composites in Vandenbrande’s 787. As the services increased their role in materials development, DARPA turned to a problem that emerged as a direct result of those advancing materials capabilities. The specific properties, strengths, and weaknesses of a material are derived from both its composition and the way that composition evolves into the material’s underlying microstructures