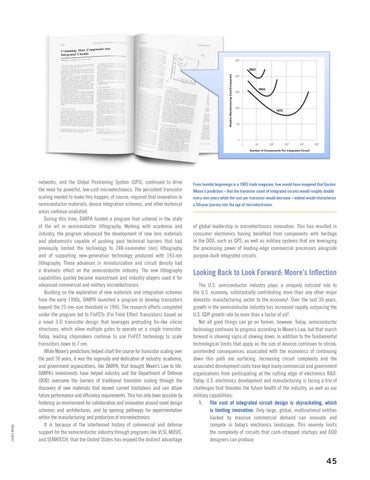 networks, and the Global Positioning System (GPS), continued to drive the need for powerful, low-cost microelectronics. The persistent transistor scaling needed to make this happen, of course, required that innovation in semiconductor materials, device integration schemes, and other technical areas continue unabated. During this time, DARPA funded a program that ushered in the state of the art in semiconductor lithography. Working with academia and industry, the program advanced the development of new lens materials and photoresists capable of pushing past technical barriers that had previously limited the technology to 248-nanometer (nm) lithography and of supporting new-generation technology produced with 193-nm lithography. These advances in miniaturization and circuit density had a dramatic effect on the semiconductor industry. The new lithography capabilities quickly became mainstream and industry players used it for advanced commercial and military microelectronics. Building on the exploration of new materials and integration schemes from the early 1990s, DARPA launched a program to develop transistors beyond the 25-nm-size threshold in 1995. The research efforts completed under the program led to FinFETs (Fin Field Effect Transistors) based on a novel 3-D transistor design that leverages protruding fin-like silicon structures, which allow multiple gates to operate on a single transistor. Today, leading chipmakers continue to use FinFET technology to scale transistors down to 7 nm. While Moore’s predictions helped chart the course for transistor scaling over the past 50 years, it was the ingenuity and dedication of industry, academia, and government organizations, like DARPA, that brought Moore’s Law to life. DARPA’s investments have helped industry and the Department of Defense (DOD) overcome the barriers of traditional transistor scaling through the discovery of new materials that exceed current limitations and can attain future performance and efficiency requirements. This has only been possible by fostering an environment for collaboration and innovation around novel design schemes and architectures, and by opening pathways for experimentation within the manufacturing and production of microelectronics. It is because of the intertwined history of commercial and defense support for the semiconductor industry through programs like VLSI, MOSIS, and SEMATECH, that the United States has enjoyed the distinct advantage

From humble beginnings in a 1965 trade magazine, few would have imagined that Gordon Moore’s prediction – that the transistor count of integrated circuits would roughly double every two years while the cost per transistor would decrease – indeed would characterize a 50-year journey into the age of microelectronics.

of global leadership in microelectronics innovation. This has resulted in consumer electronics having benefited from components with heritage in the DOD, such as GPS, as well as military systems that are leveraging the processing power of leading-edge commercial processors alongside purpose-built integrated circuits.

Looking Back to Look Forward: Moore’s Inflection The U.S. semiconductor industry plays a uniquely outsized role to the U.S. economy, substantially contributing more than any other major domestic manufacturing sector to the economy5. Over the last 30 years, growth in the semiconductor industry has increased rapidly, outpacing the U.S. GDP growth rate by more than a factor of six6. Not all good things can go on forever, however. Today, semiconductor technology continues to progress according to Moore’s Law, but that march forward is showing signs of slowing down. In addition to the fundamental technological limits that apply as the size of devices continues to shrink, unintended consequences associated with the economics of continuing down this path are surfacing. Increasing circuit complexity and the associated development costs have kept many commercial and government organizations from participating at the cutting edge of electronics R&D. Today, U.S. electronics development and manufacturing is facing a trio of challenges that threaten the future health of the industry, as well as our military capabilities: 1. The cost of integrated circuit design is skyrocketing, which is limiting innovation. Only large, global, multinational entities backed by massive commercial demand can innovate and compete in today’s electronics landscape. This severely limits the complexity of circuits that cash-strapped startups and DOD designers can produce.