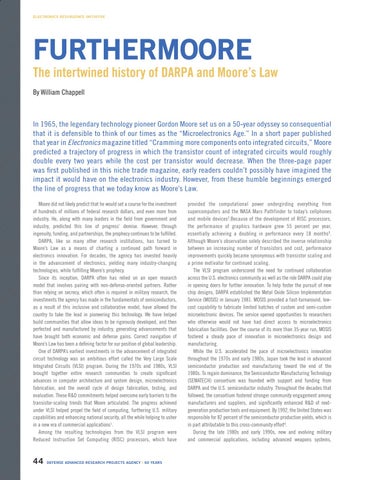 In 1965, the legendary technology pioneer Gordon Moore set us on a 50-year odyssey so consequential that it is defensible to think of our times as the “Microelectronics Age.” In a short paper published that year in Electronics magazine titled “Cramming more components onto integrated circuits,” Moore predicted a trajectory of progress in which the transistor count of integrated circuits would roughly double every two years while the cost per transistor would decrease. When the three-page paper was first published in this niche trade magazine, early readers couldn’t possibly have imagined the impact it would have on the electronics industry. However, from these humble beginnings emerged the line of progress that we today know as Moore’s Law. Moore did not likely predict that he would set a course for the investment of hundreds of millions of federal research dollars, and even more from industry. He, along with many leaders in the field from government and industry, predicted this line of progress’ demise. However, through ingenuity, funding, and partnerships, the prophecy continues to be fulfilled. DARPA, like so many other research institutions, has turned to Moore’s Law as a means of charting a continued path forward in electronics innovation. For decades, the agency has invested heavily in the advancement of electronics, yielding many industry-changing technologies, while fulfilling Moore’s prophecy. Since its inception, DARPA often has relied on an open research model that involves pairing with non-defense-oriented partners. Rather than relying on secrecy, which often is required in military research, the investments the agency has made in the fundamentals of semiconductors, as a result of this inclusive and collaborative model, have allowed the country to take the lead in pioneering this technology. We have helped build communities that allow ideas to be rigorously developed, and then perfected and manufactured by industry, generating advancements that have brought both economic and defense gains. Correct navigation of Moore’s Law has been a defining factor for our position of global leadership. One of DARPA’s earliest investments in the advancement of integrated circuit technology was an ambitious effort called the Very Large Scale Integrated Circuits (VLSI) program. During the 1970s and 1980s, VLSI brought together entire research communities to create significant advances in computer architecture and system design, microelectronics fabrication, and the overall cycle of design fabrication, testing, and evaluation. These R&D commitments helped overcome early barriers to the transistor-scaling trends that Moore articulated. The progress achieved under VLSI helped propel the field of computing, furthering U.S. military capabilities and enhancing national security, all the while helping to usher in a new era of commercial applications1. Among the resulting technologies from the VLSI program were Reduced Instruction Set Computing (RISC) processors, which have

provided the computational power undergirding everything from supercomputers and the NASA Mars Pathfinder to today’s cellphones and mobile devices2.Because of the development of RISC processors, the performance of graphics hardware grew 55 percent per year, essentially achieving a doubling in performance every 18 months3. Although Moore’s observation solely described the inverse relationship between an increasing number of transistors and cost, performance improvements quickly became synonymous with transistor scaling and a prime motivator for continued scaling. The VLSI program underscored the need for continued collaboration across the U.S. electronics community as well as the role DARPA could play in opening doors for further innovation. To help foster the pursuit of new chip designs, DARPA established the Metal Oxide Silicon Implementation Service (MOSIS) in January 1981. MOSIS provided a fast-turnaround, lowcost capability to fabricate limited batches of custom and semi-custom microelectronic devices. The service opened opportunities to researchers who otherwise would not have had direct access to microelectronics fabrication facilities. Over the course of its more than 35-year run, MOSIS fostered a steady pace of innovation in microelectronics design and manufacturing. While the U.S. accelerated the pace of microelectronics innovation throughout the 1970s and early 1980s, Japan took the lead in advanced semiconductor production and manufacturing toward the end of the 1980s. To regain dominance, the Semiconductor Manufacturing Technology (SEMATECH) consortium was founded with support and funding from DARPA and the U.S. semiconductor industry. Throughout the decades that followed, the consortium fostered stronger community engagement among manufacturers and suppliers, and significantly enhanced R&D of nextgeneration production tools and equipment. By 1992, the United States was responsible for 82 percent of the semiconductor production yields, which is in part attributable to this cross-community effort4. During the late 1980s and early 1990s, new and evolving military and commercial applications, including advanced weapons systems,