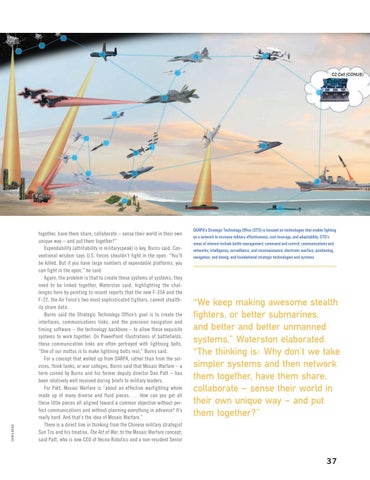 together, have them share, collaborate – sense their world in their own unique way – and put them together?” Expendability (attritability in militaryspeak) is key, Burns said. Conventional wisdom says U.S. forces shouldn’t fight in the open. “You’ll be killed. But if you have large numbers of expendable platforms, you can fight in the open,” he said. Again, the problem is that to create these systems of systems, they need to be linked together, Waterston said, highlighting the challenges here by pointing to recent reports that the new F-35A and the F-22, the Air Force’s two most sophisticated fighters, cannot stealthily share data. Burns said the Strategic Technology Office’s goal is to create the interfaces, communications links, and the precision navigation and timing software – the technology backbone – to allow these exquisite systems to work together. On PowerPoint illustrations of battlefields, these communication links are often portrayed with lightning bolts. “One of our mottos is to make lightning bolts real,” Burns said. For a concept that welled up from DARPA, rather than from the services, think tanks, or war colleges, Burns said that Mosaic Warfare – a term coined by Burns and his former deputy director Dan Patt – has been relatively well received during briefs to military leaders. For Patt, Mosaic Warfare is “about an effective warfighting whole made up of many diverse and fluid pieces. … How can you get all these little pieces all aligned toward a common objective without perfect communications and without planning everything in advance? It’s really hard. And that’s the idea of Mosaic Warfare.” There is a direct line in thinking from the Chinese military strategist Sun Tzu and his treatise, The Art of War, to the Mosaic Warfare concept, said Patt, who is now CEO of Vecna Robotics and a non-resident Senior

“We keep making awesome stealth fighters, or better submarines, and better and better unmanned systems,” Waterston elaborated. “The thinking is: Why don’t we take simpler systems and then network them together, have them share, collaborate – sense their world in their own unique way – and put them together?”