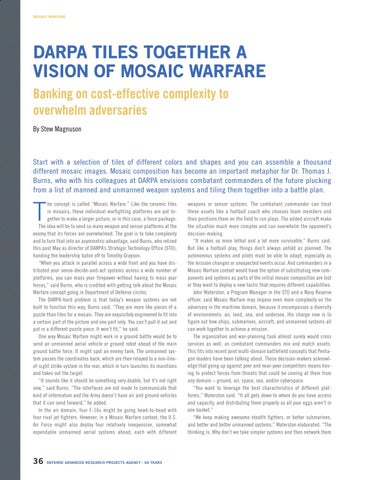 Start with a selection of tiles of different colors and shapes and you can assemble a thousand different mosaic images. Mosaic composition has become an important metaphor for Dr. Thomas J. Burns, who with his colleagues at DARPA envisions combatant commanders of the future plucking from a list of manned and unmanned weapon systems and tiling them together into a battle plan.

he concept is called “Mosaic Warfare.” Like the ceramic tiles in mosaics, these individual warfighting platforms are put together to make a larger picture, or in this case, a force package. The idea will be to send so many weapon and sensor platforms at the enemy that its forces are overwhelmed. The goal is to take complexity and to turn that into an asymmetric advantage, said Burns, who retired this past May as director of DARPA’s Strategic Technology Office (STO), handing the leadership baton off to Timothy Grayson. “When you attack in parallel across a wide front and you have distributed your sense-decide-and-act systems across a wide number of platforms, you can mass your firepower without having to mass your forces,” said Burns, who is credited with getting talk about the Mosaic Warfare concept going in Department of Defense circles. The DARPA-hard problem is that today’s weapon systems are not built to function this way, Burns said. “They are more like pieces of a puzzle than tiles for a mosaic. They are exquisitely engineered to fit into a certain part of the picture and one part only. You can’t pull it out and put in a different puzzle piece. It won’t fit,” he said. One way Mosaic Warfare might work in a ground battle would be to send an unmanned aerial vehicle or ground robot ahead of the main ground battle force. It might spot an enemy tank. The unmanned system passes the coordinates back, which are then relayed to a non-lineof-sight strike system in the rear, which in turn launches its munitions and takes out the target. “It sounds like it should be something very doable, but it’s not right now,” said Burns. “The interfaces are not made to communicate that kind of information and the Army doesn’t have air and ground vehicles that it can send forward,” he added. In the air domain, four F-16s might be going head-to-head with four rival jet fighters. However, in a Mosaic Warfare context, the U.S. Air Force might also deploy four relatively inexpensive, somewhat expendable unmanned aerial systems ahead, each with different

weapons or sensor systems. The combatant commander can treat these assets like a football coach who chooses team members and then positions them on the field to run plays. The added aircraft make the situation much more complex and can overwhelm the opponent’s decision-making. “It makes us more lethal and a lot more survivable,” Burns said. But like a football play, things don’t always unfold as planned. The autonomous systems and pilots must be able to adapt, especially as the mission changes or unexpected events occur. And commanders in a Mosaic Warfare context would have the option of substituting new components and systems as parts of the initial mosaic composition are lost or they want to deploy a new tactic that requires different capabilities. John Waterston, a Program Manager in the STO and a Navy Reserve officer, said Mosaic Warfare may impose even more complexity on the adversary in the maritime domain, because it encompasses a diversity of environments: air, land, sea, and undersea. His charge now is to figure out how ships, submarines, aircraft, and unmanned systems all can work together to achieve a mission. The organization and war-planning task almost surely would cross services as well, as combatant commanders mix and match assets. This fits into recent joint multi-domain battlefield concepts that Pentagon leaders have been talking about. These decision-makers acknowledge that going up against peer and near-peer competitors means having to protect forces from threats that could be coming at them from any domain – ground, air, space, sea, and/or cyberspace. “You want to leverage the best characteristics of different platforms,” Waterston said. “It all gets down to where do you have access and capacity, and distributing them properly so all your eggs aren’t in one basket.” “We keep making awesome stealth fighters, or better submarines, and better and better unmanned systems,” Waterston elaborated. “The thinking is: Why don’t we take simpler systems and then network them