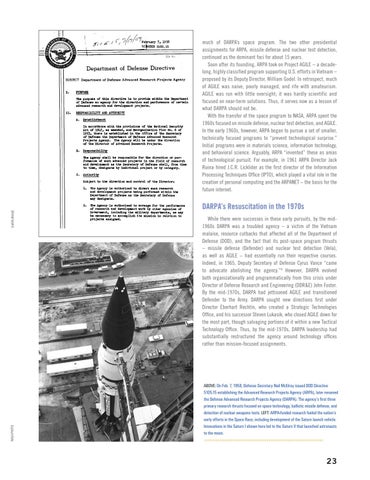 much of DARPA’s space program. The two other presidential assignments for ARPA, missile defense and nuclear test detection, continued as the dominant foci for about 15 years. Soon after its founding, ARPA took on Project AGILE – a decadelong, highly classified program supporting U.S. efforts in Vietnam – proposed by its Deputy Director, William Godel. In retrospect, much of AGILE was naive, poorly managed, and rife with amateurism. AGILE was run with little oversight; it was hardly scientific and focused on near-term solutions. Thus, it serves now as a lesson of what DARPA should not be. With the transfer of the space program to NASA, ARPA spent the 1960s focused on missile defense, nuclear test detection, and AGILE. In the early 1960s, however, ARPA began to pursue a set of smaller, technically focused programs to “prevent technological surprise.” Initial programs were in materials science, information technology, and behavioral science. Arguably, ARPA “invented” these as areas of technological pursuit. For example, in 1961 ARPA Director Jack Ruina hired J.C.R. Licklider as the first director of the Information Processing Techniques Office (IPTO), which played a vital role in the creation of personal computing and the ARPANET – the basis for the future internet.

DARPA’s Resuscitation in the 1970s While there were successes in these early pursuits, by the mid1960s DARPA was a troubled agency – a victim of the Vietnam malaise, resource cutbacks that affected all of the Department of Defense (DOD), and the fact that its post-space program thrusts – missile defense (Defender) and nuclear test detection (Vela), as well as AGILE – had essentially run their respective courses. Indeed, in 1965, Deputy Secretary of Defense Cyrus Vance “came to advocate abolishing the agency.”4 However, DARPA evolved both organizationally and programmatically from this crisis under Director of Defense Research and Engineering (DDR&E) John Foster. By the mid-1970s, DARPA had jettisoned AGILE and transitioned Defender to the Army. DARPA sought new directions first under Director Eberhart Rechtin, who created a Strategic Technologies Office, and his successor Steven Lukasik, who closed AGILE down for the most part, though salvaging portions of it within a new Tactical Technology Office. Thus, by the mid-1970s, DARPA leadership had substantially restructured the agency around technology offices rather than mission-focused assignments.